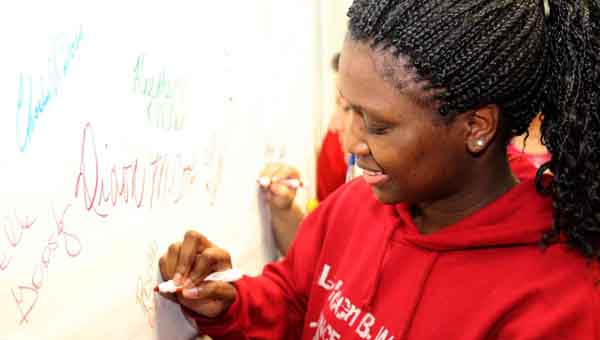 LBW Community College students recently learned about the national “Commit to Complete,” sponsored by Phi Theta Kappa International Honor Society. Pictured is Priscilla Collins of Greenville as she signs the pledge banner to complete her degree or certificate. (Courtesy Photo)

Statistics show the surest way for anyone to land a job in their chosen field is to finish college and earn a degree or certificate, and that’s exactly what students at LBW Community College are promising to do in the recently held “Commit to Complete” event.

LBWCC students learned how the United States has fallen from first to 16th among the 34 industrialized economies in the world when measuring the percentage of citizens having earned a college credential or degree and the impact that has on the national security and democracy in general. They also learned that within five years, 65 percent of all new jobs will require a postsecondary credential.

Those are only two of the reasons students gathered to sign a mass pledge to complete their associate degrees or certificates before leaving community college for transfer or to enter the job market, part of a national movement sponsored by Phi Theta Kappa International Honor Society (PTK).

At the recent event, hosted by the Alpha Beta Eta chapter of PTK, administrators, faculty and staff also signed the pledge, committing themselves to do whatever they can to facilitate completion of student credentials.

“It is vitally important to your future to complete a college credential,” LBWCC President Dr. Herb Riedel told the group. “Even if you plan to transfer, complete your associate’s degree first. Then, in case you are faced with a sudden, unexpected need to enter the workforce, you will have a better chance to find employment than those without a credential.”

PTK members are serving as the student arm of the Community College Completion Challenge, a national education initiative.  Three years ago, leaders of six national organizations representing the nation’s 1,200 community colleges signed The Call to Action, a pledge to increase student completion rates by 50 percent over the next decade. PTK was the only student organization asked to participate and launched the Community College Completion Corps in response.  Learn more atwww.cccompletioncorps.org .

At the 2010 White House Summit for Community Colleges, President Obama called for community colleges to produce an additional five million degrees and certificates in the next 10 years, part of a goal to restore the United States as the world’s leader in college graduates.

Students who complete their degrees or certificates will earn an average of $500,000 more over the course of their careers than their peers who did not complete. In addition, individuals with credentials are less likely to become unemployed than their co-workers who did not earn credentials.