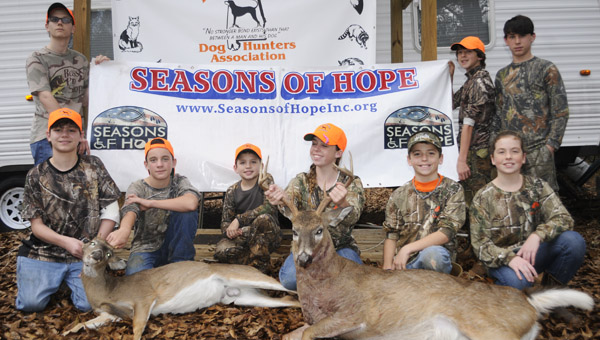 Members of the Butler County chapter of the Alabama Dog Hunters Association and Seasons of Hope teamed up to give 12 Florida children an opportunity to experience the sport of hunting with a dog. (Advocate Staff/Jonathan Bryant)

Members of the Butler County chapter of the Alabama Dog Hunters Association (ADHA) might’ve disproved their own creed that “no stronger bond exists than that between a man and his dog.”

For a weekend, a bond formed between local hunters and a dozen children was even stronger.

Dewayne Allen, member of the Butler County chapter of the ADHA and president of the Baldwin County chapter, spearheaded a dog hunt in an effort to grant the wishes of 12 Florida children alongside the Seasons of Hope charity organization.

“Mr. Michael Harris is over Seasons of Hope, and he contacted Don Knight, the Alabama Dog Hunters Association state president, and told him that he had some kids in his foundation that really wanted to go on a dog hunt, and he wanted to know if we could make that happen,” Allen said.

Through his involvement with the Baldwin County ADHA chapter and other local organizations such as Outdoors Without Limits, Allen has sponsored several events in which children with various disabilities have been able to experience the joys of the great outdoors.

Once Knight contacted him about heading up the hunt, it was only a matter of choosing a time.

Finding a location took care of itself.

“I’d mentioned it to some of the members of the club here in Butler County, and our club got on fire with the idea,” Allen said.

Safety was the first priority Saturday, as each of the children had a parent as well as a member from the club accompanying them to aid in the hunting process and keep them within the appropriate property lines.

And though dog hunting has been the subject of scrutiny recently within the state of Alabama, Allen stressed that an ounce of prevention is worth a pound of cure.

“There are some people that just don’t care — they’ll just as soon run their dogs across someone else’s property or another hunting club’s (property), and that’s where we get problems,” Allen said.

“But if you take the necessary precautions, those problems never come into play. We try to cut down on the complaints so we can all enjoy the sport we love.”

Moreover, the unique thrills of dog hunting was something that Allen said is particularly appealing to children, as he and many other members of the association began hunting at a young age in much the same way.

“With still hunting, you’ve got to sit there and just be quiet, and that’s hard for a kid to do. With dog hunting, they can go and run, holler, scream and play if they want to. I’m just glad that we’re able to let these kids come out and experience something that they’ve never experienced before.”