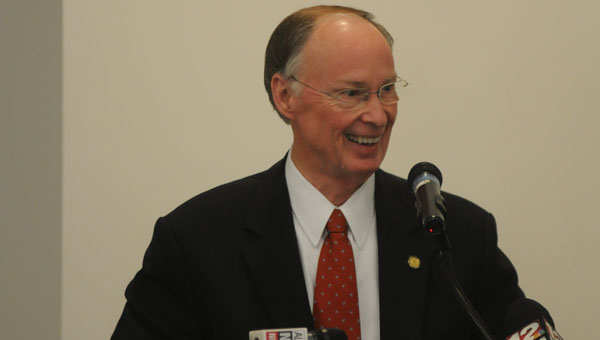 It takes a team.

That was Gov. Robert Bentley’s message concerning economic development to those in attendance at Butler County’s second annual Industry Appreciation Luncheon, which was held Thursday at the Wendell Mitchell Conference Center on the campus of LBW Community College.

“We have to work together,” he said. “… Economic development always starts on a local level. We can’t always do it from the state level. You have to sell your area.”

Bentley, who was in Butler County in May for the announcement that Ozark Materials will be opening a plant in Greenville, said because of the work of organizations such as the Butler County Commission for Economic Development, he expects more companies to choose to do business in Alabama.

“Alabama is an attractive place to do business,” Bentley said. “We’re a right-to-work state. We have low power costs. We have a low cost of living. We have low taxes. All of those things make Alabama an attractive place to do business. But the most important thing we have is our people. It’s the workers. Our workers already have the right attitude. It’s the skills we have to make sure they have, and we’re working on that.”

“We’re going to bring more jobs to all parts of the state, not only big cities like Huntsville, Mobile and Montgomery, but to smaller places like Butler County as well,” he said.

In Butler County in the past year, Hwashin America, Coastal Forest Products and Key Safety Systems announced expansions, along with the Ozark Materials announcement that it would locate a plant in Greenville. All four were recognized Thursday.

Greenville Mayor Dexter McLendon, the past chairman of the BCCED, said the creation of jobs is the key to building a successful community.

“Jobs, jobs, jobs,” he said. “They take care of everything. All you have to do is have jobs. Our economy will turn around as long as we put an emphasis on manufacturing, and we have a governor that understands that. When these businesses are successful, we’re successful.”

The BCCED also recognized REF of Alabama, Coastal Forest Products, Structural Wood Systems, Hyundai Hysco and Hwashin America for participating in the first ever Built In Butler County, which was held in October to educate the public about the products produced in Butler County.