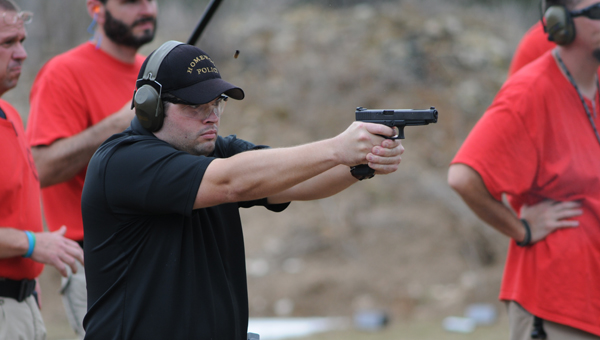 Shots rang out and cut through the silence of the morning air on Friday as law enforcement officers from agencies across the region gathered at the Greenville Police Department’s firing range to take part in the 5th annual Steel Challenge.

The event, which is sponsored by the Greenville Police Department’s Special Response Team, pits local, state and federal officers against one another in a timed shooting competition across a variety of courses.

This year, for the first time ever, the competition included the use of rifles and shotguns. In the past, it has strictly been a pistol competition.

“Adding the other weapons makes things a little more competitive,” said Lt. Justin Lovvorn, SRT Team Leader. “In the past we’ve had some guys that can really shoot with a pistol, and they run away with the competition. This way, if a guys is better with a rifle, but maybe not as a good with a pistol, he’s still got a chance.”

“Our competition is evolving, and we’re trying to make it better each year, and something that law enforcement officers from around the state want to come to and compete in,” he said.

Twenty officers from the Birmingham are to the panhandle of Florida competed in Friday’s competition, which Capt. Randy Courtney, SRT Commander, said not only offers training, but also helps officers from across the state connect with one another.

“It’s a great way to network,” he said. “A lot of these guys I only see once a year when they come down here to shoot. One of the great things about the event is it brings guys together. It’s also just a lot of fun. Most of the time when we come down to the range it’s real structured. This is more laid back. You’re still getting training in because you’re shooting, but it’s more relaxed. That’s why these guys enjoy it so much.”

The top three finishers from each course advanced to the “Top Gun” competition.

During the “Top Gun” round competitors used all three weapons to complete the course.

“This has been a very successful event that we’ve had for a number of years now, and it just keeps getting better and better,” GPD Chief Lonzo Ingram said. “It’s a lot of fun, and  more than anything else it’s a great time of fellowship between members of different departments. This is just a great event that we look forward to every year. ”