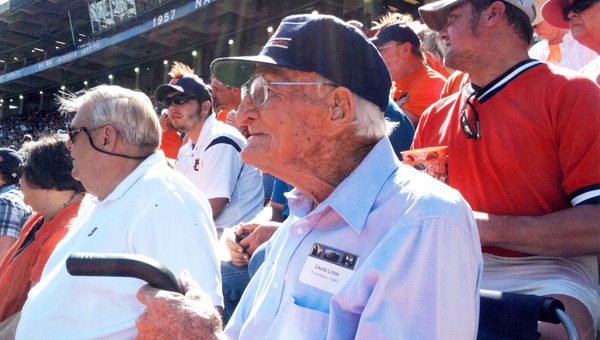 David Lyon, 91, was recognized as one of the oldest living Auburn Tigers during Saturday’s Iron Bowl. (Photo Courtesy of the Selma Times-Journal)

By Daniel Evans
The Selma Times-Journal

David Lyon, 91, still reminisces about the early 1940s when he played running back for Auburn University and on Saturday, in perhaps the biggest Iron Bowl in history, he was recognized as one of the oldest living Auburn Tigers.

Lyon said he is still a member of the Auburn Quarterback Club and flips through the list of members to see if anyone else he knows has died.

“I’ve been a member of the Auburn Quarterback Club all these years and I get the book every year and I look and see if any more players have died,” Lyon said. “It has been a long time since there was a player that I knew that had died.”

Given his age, Lyon still gets around well, but a bad knee stops him from attending Auburn games these days, although he has many stories from games he has been to.

“I’ve been an Auburn fan ever since [I went there] and I have gone to many games,” Lyon said.

Lyon was recruited by Auburn from Hayneville High School by head coach Jack Meagher and played his first year with the Tigers in 1940. At that time, freshmen were not allowed to play football with the varsity, so Lyon did not see a lot of action.

Following his junior season, Lyon and many other Auburn football players were called into World War II.

Lyon and the Auburn players were bussed to Fort McPherson in Georgia. Once he graduated from officer candidate school at Fort Fill in July 1944, his group was ordered to go to Normandy, but the day before he was supposed to go Lyon suffered a partial facial stroke.

After the stroke and one week in the infirmary, Lyon was reassigned to another group and was anchored in Pearl Harbor, but when his ship anchored the Japanese surrendered.  From there, he was ordered to Manila in the Philippines to serve as an officer at a prisoner of war camp for one year.

After his time in the Philippines was finished, Lyon returned to the United States and was asked if he wanted to play football again by Auburn, who had cancelled its season in 1943 due to the war.

“I have heard some mighty fine things about you and hope you will return to Auburn and complete your education after the war,” Auburn’s athletics director at the time, Carl Voyles, wrote in a letter to Lyon. “I am anxious to have the privilege of meeting you and want you to know that we are holding your scholarship for you.”

Lyon decided that rather than finishing his degree in agriculture he would go home and start farming. He also wanted to start a family with his wife, Martha Virginia Lewis, who he had married after they graduated from Hayneville High School together.

Saturday he was honored with his family surrounding him on the field. His son, Bill, said his dad appreciated the honor.

“I think that is a time in his life where he just (appreciated) it, mainly because all of the family (got) to be there and go back to Auburn one more time all together,” Bill said.

It’s fair to say the Lyons all bleed orange and blue. David’s other son, Dave went to Auburn and played safety. Most of the other family members — including Bill — have attended Auburn.

Although David never played in an Iron Bowl because the series was stopped in 1907 and did not resume until 1948, his background gives him more insight than most and he’s expecting a tremendous football game.

“Unbelievable plays are being made by these players but Bama is always tough,” Lyon said. “I believe we will play a good game.”