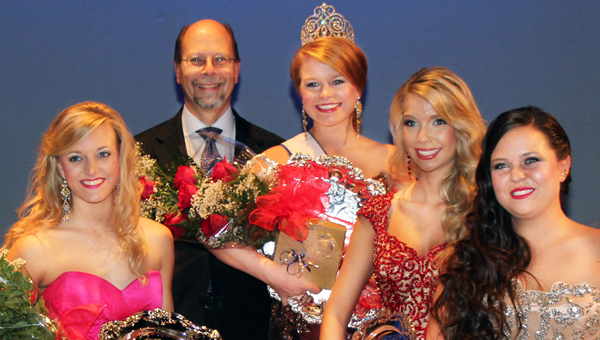 Sydney D. Rogers of Highland Home crowned Thursday night after being named the overall talent winner in the competition, which was held at the Dixon Theater for the Performing Arts on the Andalusia campus.

Rogers is a freshman at LBWCC, a 2013 graduate of Highland Home High School, and the daughter of David and Kim Rogers. In her community, she volunteers with Giggles and Grins Daycare, serves as ambassador for the National Juvenile Diabetes Foundation, is a Crenshaw County Chamber Belle, and participates in the Spirits of HHS.

Her talent performance was a recreation of a scene from the movie “Risky Business” as she clogged to the song “Old Time Rock ‘N Roll” by Bob Seger.

After Rogers completes her degree at LBWCC, she plans to continue her educational pursuit toward a master’s degree in elementary education and a specialist degree in educational administration.

Kristy Sport was named as first runner-up. She is a freshman at LBWCC and a member of the Saints softball team.  She is the daughter of Michael and Sherry Sport and a 2013 graduate of Highland Home High School. She was named Miss HHS in 2012, and is a volunteer with Habitat for Humanity.

Sport performed a jazz dance to “Sing Sing Sing” by Benny Goodman in the talent portion of the competition.

Following completion of an Associate’s Degree at LBWCC, Sport plans to transfer to the University of South Alabama to pursue a degree in physical therapy.

Named as second runner-up was Victoria D. Veasey of Straughn, a freshman at LBWCC and a 2013 graduate of Straughn High School. She is the daughter of Keith and Sonja Veasey, and has participated in the American Legion Auxiliary, Coopers Crew, and Relay for Life.  At LBWCC, she is a member of Phi Theta Kappa International Honor Society, named to the President’s List, and is involved in the drama department.

Veasey’s performance in the talent competition was a “Barbie” monologue. Her plans following the completion of a degree at LBWCC include transferring to Troy University where she will pursue a degree with a major in business administration and a minor in economics.

She is a sophomore at LBWCC, a member of the Saints softball team, and serves as a community assistant for Saints Hall apartment complex. Her community activities include volunteering with Habitat for Humanity, Children’s Hospital, and the animal shelter.