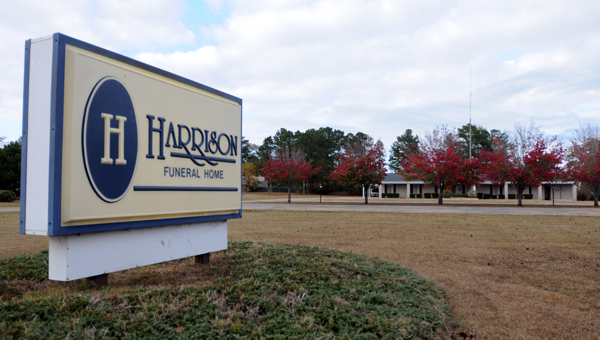 The Alabama Board of Funeral Services voted Tuesday to revoke the establishment permit of Harrison Funeral Home in Greenville and the service license of its operator, Douglas “Dusty” Harrison. (Advocate Staff/Andy Brown)

MONTGOMERY — A state board has revoked the license of a Butler County funeral home operator alleging he mishandled money paid for certain funeral contracts.

The Alabama Board of Funeral Services voted Tuesday to revoke the establishment permit of Harrison Funeral Home in Greenville and the service license of its operator, Douglas “Dusty” Harrison. The ruling will become official in two to four weeks when the order is drafted.

According to the board, Harrison Funeral Home sold more than $250,000 in pre-need contracts from 2004 to 2013 without a certificate of authority (COA) granting the establishment the right to enter into such contracts. The funds, according to the board, were also not placed in a trust, but rather were used to help cover the operating expenses of the funeral home.

“For years Mr. Harrison sold pre-need contracts with complete disregard for the laws of the State of Alabama,” said Cameron McEwen, legal counsel from the Attorney General’s Office.

On June 21, 2012, the Alabama Department of Insurance issued Harrison Funeral Home a cease and desist order, preventing the funeral home from offering, selling, entering into or collecting payments on pre-need contracts.

During Tuesday’s hearing, two witnesses testified that they purchased pre-need contracts from Harrison Funeral Home in October of 2012.

“Mr. Harrison continued to sell the pre-need contracts well after the cease and desist order was issued,” McEwen said.

During testimony, Harrison acknowledged that his funeral home had sold pre-need contracts without a COA, and that the funds had been placed in funeral home’s general operating budget, but said that he had not yet failed to honor one of the contracts.

“I have fulfilled every one of them,” he said.

“We didn’t solicit them,” he said. “We weren’t out ringing doorbells or calling people trying to sell them these contracts. These were people we had known for years that came and asked us to do this. I was aware that we were selling them without a COA, and that was wrong.”

Harrison told the board that he plans to fulfill the pre-need contracts Harrison Funeral Home has already sold. Presently those contracts are unsecured.

“Nobody is going to lose a thing,” he said.

Harrison, who according to his attorney, Pete Hamilton, filed for bankruptcy on Monday, said he plans to sell his funeral home and put the money from the sale in a trust for the new owner to use to fulfill the contracts or refund the money to those who purchased pre-need contracts from his funeral home.

Harrison said he had already signed with a brokerage firm to sell his business, which he has owned and operated since 1987.