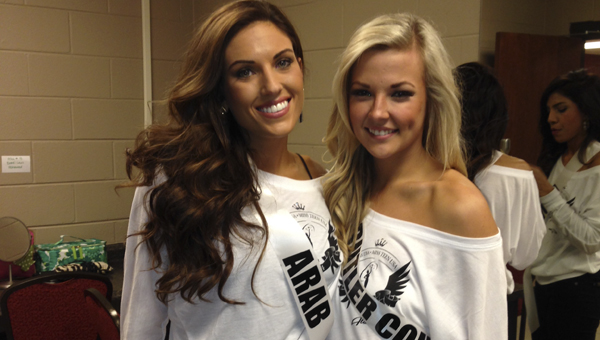 And though she didn’t walk away with the crown, she did leave with the experience of a lifetime.

Amid the hustle and bustle of the competition itself, the pageant also afforded Bates the opportunity to meet with several of the other 43 representatives, but she developed a notable bond with one special contestant in particular.

“The judges made a great decision in choosing her to represent our state, and I’m so excited that I will cheer her on all the way to Miss USA next summer.”

Though the Miss Alabama USA pageant experience was one that Bates is unlikely to forget anytime soon, it was almost one that never happened in the first place.

With very little pageant experience — two Fort Dale Academy pageants in grades 7 and 10 were her only prior experience onstage, though she won them both—Bates entered the Miss Alabama USA pageant at the suggestion of a friend last fall.

After emailing RPM Productions and beginning the interview process to gain her title, the only choice left was to choose a county to represent.

But for Bates, it wasn’t much of a choice at all.

“I chose to represent Butler County because I have gone to school at Fort Dale Academy all of my life, so Greenville was my home away from home,” Bates said.

“After they accepted my title, I began searching for sponsorships to cover my sponsorship fee, and I gained so much local support through that and I can’t thank everyone enough.”

The Miss Alabama pageant also packed a few surprises for Bates, including the chance to be interviewed by special guests Scott Stapp, lead singer of the rock band Creed, and Korie Robertson of Duck Dynasty fame.

But more than any celebrity meeting, the pageant was a chance for Bates to gain confidence in herself.

“I learned that you don’t have to be a cookie cutter girl to do well in pageants,” Bates added.

“I am not your typical pageant girl, so I thought this would be a great way to show girls that you don’t have to be “Miss Pageant Patty” to compete.

“Be unique.  The judges want you to be you. I would recommend this pageant to any girls wanting to compete.  You will regret it if you don’t go for your dreams.”

Though Bates took the fall semester off to focus on the pageant, she will continue her studies in public relations with a focus on advertisement at Troy University next semester.

And while many major decisions await her down the road, it’s a journey that she is looking forward to embarking on.

“I am still taking it all in and I haven’t figured out my next step,” Bates said.

“But I’m just going to see what the good Lord has in store for me next, focus on school and wait for the next chapter in my life to start.”