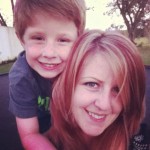 Taylor Hayes is shown with his mother, Emily.
COURTESY PHOTO

A Highland Home kindergartener was involved in an accident Monday afternoon.
“One of our own has been in an accident,” a statement from the Highland Home School Facebook page read. “Please join us in praying for Taylor Hayes. He is in kindergarten at HHS. May God be with him and his family during this terrible time.”
A Monday night update from the school says that Hayes has been placed on life support, but the tides changed on Tuesday and he was able to under go surgery.

“Taylor is out of surgery and the surgery team said things went exactly as planned so there were no set backs or problems,” the school  page said.
Hayes was airlifted to a Birmingham hospital this evening.

Hayes’ mom, Emily, posted to Facebook Tuesday that he made it through surgeries and doctors said he’s made a miraculous improvements..