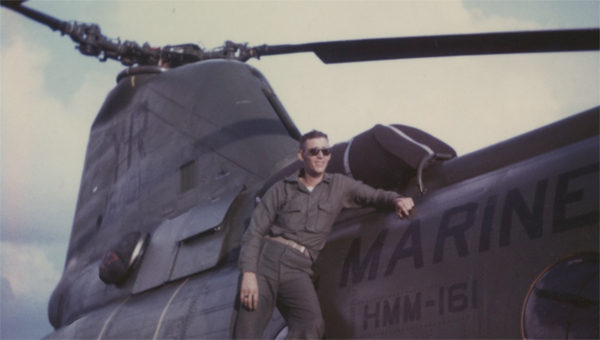 Danny Haire served as a crew chief with Marine Medium Helicopter Squadron 161 during the Vietnam War and was awarded more than 20 Air Medals and the Purple Heart. (Courtesy Photo)

Danny Haire believes a man should serve his country.As a 19-year-old kid that belief led Haire to raise his hand and volunteer to serve in the United State’s Marine Corps during the height of the Vietnam War.“Coming out of high school I felt like it was a thing I should do,” he said. “I didn’t want to get drafted, so I enlisted in the Marine Corps.“Little did I know what I was in for,” Haire added with a grin.

Haire went on to serve as a crew chief with Marine Medium Helicopter Squadron 161.

While serving in the Quang Tri Province of Vietnam, Haire logged more than 2,800 flight hours, lost three aircraft as a result of enemy fire, and was wounded twice.

He was awarded a Purple Heart and more than 20 Air Medals.

To qualify for an Air Medal, one must fly four missions and have met enemy opposition at least twice.

“There was no shortage of flight time,” Haire said. “The guys in the field needed food and ammo and there were always troops to take into or bring out of the field. We all got plenty of flight time.”

While in Vietnam, Haire made a promise to God.

“I told him that if he got me back home, I’d keep my feet on the ground. He got me home, and I haven’t been up in the air since,” he said.

Many weren’t as lucky.

“We lost a lot of good men there,” Haire said.

After returning home, Haire learned of the protests surrounding the war.

“I didn’t know the war was unpopular until I got home,” he said. “That never sat well with me, but there’s nothing I could do about it.”

Haire hopes that no soldier will ever have to endure the treatment that his fellow soldiers did when returning home from battle.

“For me, Veterans Day is a reminder to think about our country and the men and women who serve,” he said. “I’d hope that when someone sees one of these kids coming home, they’d walk up and hug (the soldiers) neck, shake their hand and thank them for serving. I’d hope that we wouldn’t let them go through what our generation went through.”

ERIC O. CATES, JR. • WORLD WAR II & KOREA
As a 22-year-old kid, Eric O. Cates, Jr., thought he’d give the Army a try until he figured out exactly what he wanted to do.It turns out serving in the Army was exactly what Cates wanted to do.Cates, a veteran of World War II and the Korean War, spent 35 years in the military before retiring as a colonel.“I found out I really liked the military, and I stayed a long, long time,” he said. “There were a fine bunch of people in there and I enjoyed it. It was well organized, and I just liked it. It fit me.”

Cates, a self-described farm boy, got his first taste of military life in October of 1940 when he enlisted in the National Guard.

Just more than a year later, Pearl Harbor was attacked by the Japanese and Cates soon found himself stationed in the Aleutian Islands.

It was while serving in the Aleutian Island campaign, that Cates first found himself engaged in combat.

His specialty was field artillery, and at one point during the Aleutian Island campaign, Cates went ashore at Attu as a forward observer for the 7th Army Division.

As such, his job was to relay information back to artillery units that would then use the information to bombard enemy positions.

“An artillery unit rarely sees what they are firing at,” Cates said. “They can be two miles, four miles, even eight miles from their target. They take the information from the observers and use that to plan their where to fire.”

Once the Aleutian Island campaign Cates was order to the Pacific. By the time he and the rest of the troops arrived, the fighting was over.

“Our ship had just gone under the Golden Gate Bridge when the first atomic bomb was dropped,” he said. “That ended the war for all of us.”

For Cates, however, it wouldn’t be his last time in a combat zone.

When the Korean War broke out in 1950, Cates once again found himself being called up to serve.

And this time, things were much different.

“In World War II, I was really only in a combat situation once,” he said. “We fought for a number of days during the Attu invasion, but for me that was it. I was in Korea for exactly a year, and I was in combat every day that I was there.”

While on a reconnaissance mission, Cates observed enemy camps across a deep ravine.

According to Cates, the positions were nearly impossible to hit with indirect artillery fire, and posed a great threat to the U.S. troops because the Chinese could use the positions for both observation and firing points.

He devised a plan.

Upon returning from his mission, Cates recommended to his commanding officer that a howitzer be placed on the side of the ravine occupied by the U.S. troops.

Cates’ suggestion was met with approval.

“Lt. Col. James Taylor said, ‘This is your idea. Would you like to be the project officer?’ It seemed to me I had gotten too far into it to back out then, so I said yes.”

The howitzer was placed on the side of the ravine and the troops began their assault on the enemy camp.

“We fired 200-pound shells from a 1,000 meters,” Cates said. “Because of our position we were able to fire directly at the enemy. We did a lot of damage. It was a good shoot.”

The assault resulted in the destruction of 96 Chinese bunkers and approximately 35 casualties.

Following his tour in Korea, Cates returned to the National Guard where he continued to climb in rank before he retired in 1975.

Not once has Cates regretted his decision to enlist.

“I was just a farm boy,” he said. “I had a high school education, but I really didn’t know what I could do. The military taught me that I could compete and be successful. It gave me a lot of confidence. I loved serving. The military is a big part of my life.”

For Cates, who also went on to serve two terms in the Alabama legislature from 1974-1982, Veterans Day is a chance to remember those he served with during his career.

“I served with some fine people,” he said. “To me Veterans Day is about remembering them and everyone that has served.”

Greenville Police Department Capt. Anthony Barganier once dressed in a different uniform, though one dedicated to the same ideals to protect and serve.And despite the fact it’s been more than two decades since he traded in his fatigues for police blues, a soldier’s duty is never really done.Even while surrounded by close family members that served in the military — including a brother as well as his father, who is now a disabled veteran — Barganier’s decision to join the Army was largely his own.“I was just compelled to serve my country to some capacity,” Barganier said.

“And I felt like the military would be the best way to do that.”

After graduating from Greenville High School in 1985, Barganier joined the Army one year later and was inevitably swept up into Operation Desert Storm, where he was stationed in the Persian Gulf.

Though it was an intense experience by his own admission, the hardships involved made the goal all the more meaningful.

“It was really a great thing to be able to serve my country in that capacity, and also at the same time you’re mindful that everyone there is in harm’s way,” Barganier said.

“So the concentration was to complete the missions that we were given and to get back home safely to our families.”

Barganier’s duties and responsibilities during the Gulf War were numerous, but they chiefly involved guarding and patrolling several key locations within major war zones with an advance team, and clearing them of hazards so that troops behind him could set up safely.

It was an unconventional task force of sorts composed of active duty, reserve and National Guard soldiers.

And though they all came from different facets of the military, a common, unbreakable bond united them.

“It’s just a proud tradition that we had about people serving in the military — whether you’re active duty or a veteran — you’ll always remember the others that sacrificed before you, and the people who are currently sacrificing to make sure that everything is still safe,” Barganier said.

But whether his duty calls for defending his country from threats both foreign and domestic or public service works for the Camellia City, Barganier’s drive derives itself from the same source.

“I was overseas in Desert Storm whenever I was getting the call that I’d been hired here,” Bargainer said.

“I’ve been in police work for almost 23 years, and I do believe that the willingness and drive to protect and serve spilled over into my career that I chose after the military.

“We live in a great area, and there are remarkable people here in Greenville.  It’s certainly an honor to do be doing the job that I’m doing.”

He grew up like most boys dressing up in camouflage and pretending to be a soldier.But for Greenville native and Fort Dale Academy graduate Nathaniel Foster, his boyhood dream of being a soldier turned into a career.Foster joined the Army in July 2002 and served active duty until July 2006. Foster served two tours in Operation Iraqi Freedom (OIF). During both tours Foster was stationed in the Iraqi city of Mosul, and near the Turkish and Syrian border.Joining the Army was something that Foster wanted to do ever since he was a kid.

“I always knew I’d grow up and be in the military,” said Foster.  “It really wasn’t a hard decision. It was what I knew I’d do since I was a little boy. My Uncle Dan, now deceased, a retired veteran who served in WWII, Korea and Vietnam, was one family member that had a lot to do with my decision too.”

Foster served as a sergeant in the F Company 51st Infantry, and was a member of the Ranger Regiment.

Rangers volunteer to become members of the Ranger Regiment and complete a rigorous three-phase assessment and selection process.

“Being a Ranger sets you up for success,” said Foster. “Rangers are tough, they work hard and being a Ranger gives you a sense of pride. There’s a small percentage of military that are Ranger qualified. Not everybody can say they’ve done it, but I am proud that I had a chance to be a part of it.”

“Rangers Lead the Way” is the Rangers’ motto and in Foster’s experience it certainly proves true.

“My surveillance unit specialized in going places that no one else would go, or could get into,” said Foster.  “My unit was always on foot and focused on long-range surveillance and patrol of certain areas.”

Foster said that being overseas can take its toll on a solider, but that the support he received from folks back home helped make his tours a little easier.

“A lot of folks from Greenville did nice things for me while I was on tour,” said Foster.  “People sent cooked items and school kids sent over care packages full of notes and items. It really does mean a lot to have a little piece of home when you’re so far away.  I had so many good encounters during my tours and when I came home,” said Foster.

Foster currently resides in Auburn where he works full-time as a game warden for the Sate of Alabama, covering the Macon County area.  Foster has served in the National Guard since January 2007.