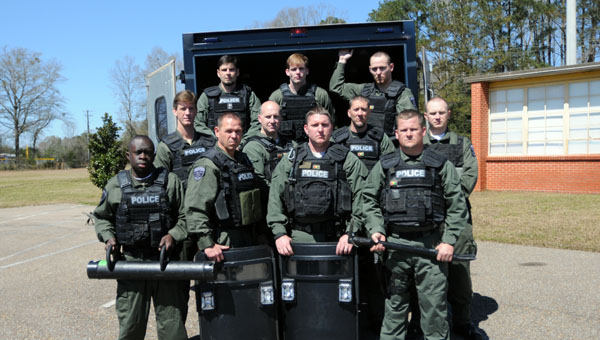 It wasn’t quite David vs. Goliath, but in some ways it was close.

The Greenville Police Department’s Special Response Team (SRT) finished in third place at the Alabama Tactical Officers Association Tactical Tournament ahead of much larger departments such as the Tuscaloosa Police Department and the Alabama State Troopers. The competition was held Oct. 28-31 in Orange Beach, Ala.

The team, which was made up of eight of the unit’s 11 members, tied with the Decatur Police Department’s SWAT team for the second best score in the competition, but was forced to settle for third place after the tiebreaker gave the advantage to Decatur.

“I think this says a lot about our team,” said Lt. Justin Lovvorn, SRT team leader. “For a department of our size to go down and finish in the top three is pretty good. To be honest, we got more attention for finishing third than the first-place team did just because we are from a smaller department. A lot of the SWAT teams at the competition are bigger than our entire department.”

Greenville’s SRT is a group of highly trained officers that respond to hostage and barricade situations. They also do the first entry on buildings under search.

“Before (we had Special Response Team) we would secure the perimeter and wait for the state’s team to come assist with the situation,” Capt. Randy Courtney, SRT commander, said. “Those guys are scattered all over the state and it could take up to six hours for them to get to the scene.”

Courtney saw that as a problem.

The Tactical tournament, which is held in conjunction with the Alabama Tactical Officers Association’s annual conference, is a physically grueling contest that tests a team’s ability to perform in a variety of scenarios.

This year’s competition featured a bus assault, a shooting relay and a sniper-initiated shooting house, as well as a one-man iron man race, which served as the tiebreaker.

Courtney praised his team for its performance.

“I’m proud of our guys for how well they did,” he said. “… To have a 34 or 35 man police department and go down and compete with departments the size of Tuscaloosa and Lee County is huge for us. Our first competition was in 2009 and we’ve competed every year, and we keep getting better and better, so we must be doing something right.”

Courtney believes the continuity of the team plays a significant role in its success, both in the competition and in real-life operations.

“We’ve had a lot of the same guys since we started the team in 2005,” he said. “I think that’s helped us. Our guys are familiar with each other and know how to work together. A lot of bigger departments roll guys off their teams when they reach a certain rank, and so then they’re training new guys to take those spots. We’ve basically had the same team since we started it.”

“I’m very proud of the tactical team we’ve put together,” Ingram said. “To go to the competition and compete against those other SWAT teams from across the state and walk away with third says a great deal about our team’s leadership and the training our guys go through.”

“For a city the size of Greenville to have a team like this is something for our department and our city to be proud of,” Lovvorn said.