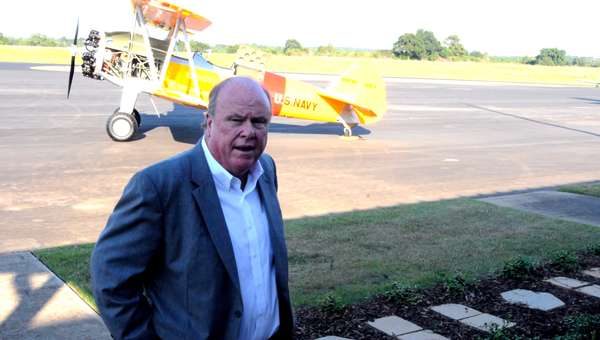 Greenville Mayor Dexter McLendon, pictured at an open house at Mac Crenshaw Memorial Airport in September, and city officials are seeking more than $500,000 in grant money to make improvements at the airport. (File Photo)

The City of Greenville is seeking $561,361 in federal and state funding to make improvements to the Mac Crenshaw Memorial Airport.

On Monday, the city council authorized city officials to proceed with an application for a grant through the Federal Aviation Administration Airport Improvement Program for taxilane construction at the airport.

The city is seeking $531,816 in federal funds and $29,545 from the Alabama Department of Transportation to fund hangar improvements and taxilane development.

The hangar improvements would increase the facility’s capacity, while also providing patrons with increased hangar options, such as a T-hangar and corporate hangar.

Since 2000, with the assistance of the Federal Aviation Administration Airport Improvement Program, the city has spent approximately $10 million to improve its airport, according to McLendon.

The latest round of improvements, which cost just less than $90,000, upgraded the airport’s terminal.

The renovations included a new roof, a new heating and cooling unit, upgrades to the building’s electrical and plumbing systems, new paint, paneling and flooring, an expanded break room, a ramp that meets the Americans with Disabilities requirements, and landscaping around the terminal.

In recent years, the city has used FAA Airport Improvement Program grants to extend the runway to 5,500 feet, upgrade the lights along the runway and construct a taxiway that extends the length of the runway.

“We plan to continue to make improvements out here,” McLendon said. “It’s important that we do. I don’t want anyone to think this airport isn’t important, because it is. It’s extremely important when it comes to creating jobs. All of these improvements are about jobs. The airport is vital to getting businesses to locate here.”

McLendon said the city is in the process of creating a 10-year plan that outlines future improvements to the airport.

Taylor will not seek re-election