Taylor will not seek re-election 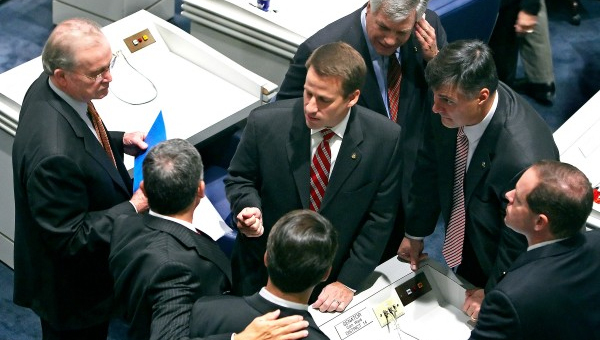 Sen. Bryan Taylor (center) announced Monday afternoon that he will not seek re-election to the Alabama Senate in 2014. (Courtesy Photo)

MONTGOMERY – State Sen. Bryan Taylor (R-Prattville) announced Monday afternoon that he will not seek re-election to the Alabama Senate in 2014.

Taylor and his wife, Jessica, recently announced that they are expecting their third child in May and Taylor said he plans to return to his private law practice and focus on his family.

“Jessica and I were overjoyed to learn several weeks ago that we would be blessed with another child. Of course, with two babies under the age of three already, we knew we needed to re-evaluate our priorities and started praying about this decision,” Taylor said. “We believe this decision reflects God’s will for our family right now.

“I got into public service to make a difference and then step aside, returning to my private sector career. Perhaps one day the Lord will lead me back into public service, but for now I’m certain he is calling me to fulfill my commitment to the voters by serving out this term and move along to focus more squarely on my military service and private career to support my family.”

“Sen. Taylor ran for office on the promise to clean up state government, cut spending and create jobs,” Marsh said. “Over the past three years he has been at the center of our efforts to do just that. Alabama has added thousands upon thousands of new jobs, unemployment has dropped and is the lowest in the Southeast, and we have cut government spending by nearly $1 billion a year. While he will be missed in the Senate, I respect Sen. Taylor’s decision and am grateful for his service.”

Senate Majority Leader Jabo Waggoner said Taylor’s commitment to serving his constituents was evident by his strong support within the district.

“Sen. Taylor has done an outstanding job representing his constituents in the Alabama Senate, and that’s been reflected in the strong public opinion we have seen within his district,” Waggoner said. “As a young lawmaker, he stepped up to the plate on day one and became actively involved with a historic transformation of state government. I know this was a very difficult decision, but I appreciate his dedication to honoring his family obligations first.”