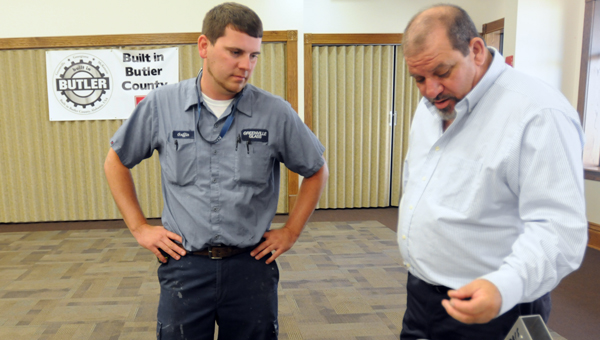 A handful of manufacturers that call Butler County home were on display Thursday during the first ever “Built in Butler County.”

The exhibition, which was sponsored by the Butler County Commission for Economic Development and the Greenville Area Chamber of Commerce, was held to educate the public about the products produced in Butler County.

“We want to let people know what manufactured here,” said David Hutchison, executive director of the Butler County Commission for Economic Development. “We want to make people aware of what’s being built right here in their community.”

That’s one of the reasons REF Alabama, which is located in Greenville, chose to participate.

“A lot of people right here in our community don’t know what we make,” said Tyler Carter, operations manager at REF Alabama. “We felt like this was an opportunity to educate people on what we do.”

According to Carter, REF Alabama is a full service machining company that specializes in non-ferrous metals, and produces a number of parts for a variety of industries.

Carter said Thursday’s event offered his company an opportunity to network with other area manufacturers, as well as introduce itself to potential employees, such as sophomores from across Butler County that attended a morning session held to introduce them to the manufacturers.

“We’re seeing more and more applicants that are right out of high school, so I think this was a great opportunity for us to make people aware of the opportunities right here in Butler County,” Carter said.

Along with REF Alabama, Coastal Forest Products, Hwashin America, Hyundai Hysco and Structural Woods Systems were also on hand for the event, which was held at the Wendell Mitchell Conference Center on the campus of LBW Community College.