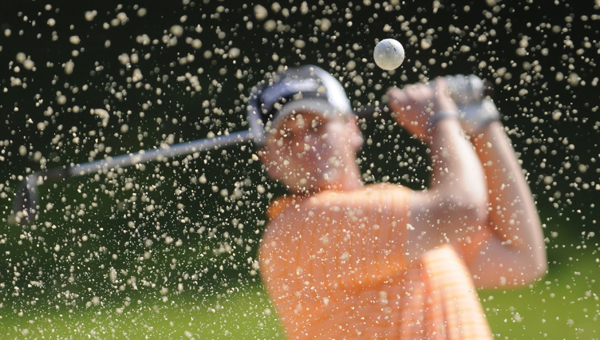 On Wednesday, officials celebrated the 10 millionth round of golf played along the Robert Trent Jones Golf Trail. (File Photo)

The Robert Trent Jones Golf Trail celebrated its first round of golf in 1992.

On Wednesday, officials celebrated the 10 millionth round of golf played along the Trail.

“Instead of just honoring one person as our 10 millionth visitor, we (celebrated) across the Trail and every golfer on (Wednesday was) part of the celebration,” said John Cannon, president of the Robert Trent Jones Golf Trail. “Our golfers – local, regional, national and international – have been very loyal to the RTJ Golf Trail and this (was) a way of saying thank you while celebrating this significant milestone.”

Bryan Reynolds, director of golf at Greenville’s Cambrian Ridge, said the milestone is a testament to the quality of golf provided by the Trail and also the vision of Dr. David G. Bronner, the CEO of the Retirement Systems of Alabama, who was the driving force behind the creation of the Trail, which now boasts 26 courses on 11 different sites.

“Similar trails in Tennessee and Louisiana tried to follow (the Robert Trent Jones Golf Trail) and they’ve folded,” Reynolds said. “At the same time, our trail has continued to grow because we offer great, affordable golf. I think the Trail has exceeded even what Dr. Bronner expected it to do. It really is one of the top attractions in the state, right along with our beaches.”

Before the Trail opened in 1992, Alabama’s tourism revenue was less than $2 billion. In 2012, tourism revenues topped $10.6 billion and the state’s top attraction was the Robert Trent Jones Golf Trail.

What started as a concept to enhance the image of the state has turned out to be one of the most successful achievements in the golf industry.

“What we were trying to do was give an impression of Alabama to people that was different than what they had in mind,” said Bronner.

Bronner believed the way to do that was to construct a dazzling collection of public golf courses that stretched across the state.

He set out immediately to find the right group to put his plan in motion.

Enter Bobby Vaughan, the former director of golf at Tanglewood in Clemmons, N.C. Bronner charged him with putting together the team for the massive project. Vaughan formed SunBelt Golf Corporation which would develop, construct, operate and manage all 18 of the original golf courses.

But there was still the matter of who would design the new courses.

Bronner and Vaughan decided to aim high. The pair pitched the idea to legendary architect Robert Trent Jones, Sr., who had designed more than 500 golf courses around the world, many of which are listed among Golf Digest’s “America’s 100 Greatest Golf Courses.”

“I made a deal with him that the Trail would be his Sistine Chapel,” Bronner said.

Jones signed on and one of the most massive golf course construction projects in the history of the game began shortly thereafter.

And Greenville officials made sure that the Camellia City was a part of it.

Mayor Dexter McLendon, then a first-term city council member, wrote Bronner a letter asking that Greenville be considered as a site for an 18-hole golf course.

Bronner, who has been quoted as saying “I don’t do windows and I don’t do just 18’s,” promptly responded that he was not interested. But Greenville’s city officials weren’t ready to call it quits.

“We weren’t thinking big enough,” McLendon said. “We went back to him and asked what we needed to do to be a part of the Trail.”

Bronner provided a list on a sheet of yellow legal paper. The list included building a road, guaranteeing that two billboards — one facing north and the other south -— would be placed on Interstate 65 and securing more land to build a course that would include 27 championship holes and nine short course holes.

“We came back and got to work, and in a few weeks we were back in his office asking what else we needed to do,” McLendon said.

McLendon said he believes Greenville’s persistence in seeking to be a part of the Trail won Bronner over.

“We are the smallest city on the Trail, but we just wouldn’t give up,” McLendon said. “Getting this done was too important.”

Bronner agreed to add Greenville as a stop on the Trail and shortly after Cambrian Ridge opened up, it was named the third best new public golf course in the country by Golf Digest. The magazine also listed it 13th on its list of “America’s Top 50 Affordable Courses.”

In 2003, Cambrian Ridge was immortalized on the 2003 Microsoft golf game “Links.”

“Sometimes I’ll be out there on the course and I’ll have to remind myself that I’m in Greenville,” McLendon said. “At times it’s still hard to believe that we have a golf course of that caliber here in Greenville.”