Greenville native returns to the Ritz 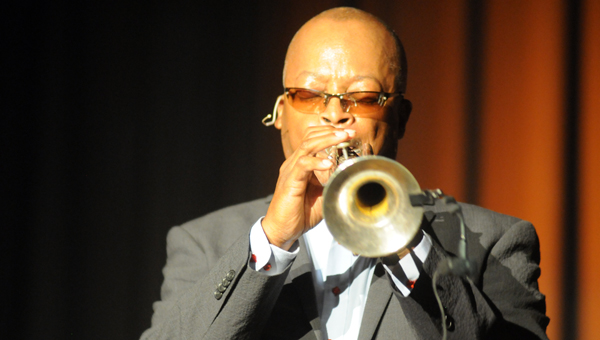 There’s no place like home, and no one knows that more than pianist and trumpeter Anthony Womack, also known as WoJamm.

Womack, along with his wife Shiron Denise, performed at the Ritz Theatre Thursday night to kick off the Greenville Area Arts Council’s 32nd season.

As a product of Greenville, having the chance to see his hometown once again was cathartic.

But as a once-aspiring musician molded by the blooming cultural hub of the Camellia City, the opportunity was a blessing.

And though playing music has since become a lifelong passion for him, it was very nearly a path that he never took at all.

Womack’s interest began at a young age with piano lessons serving as his first foray into the music world, but a common Saturday morning vice almost ended his music career right then an there.

“That was my early formal education, but I discontinued after about five months because, quite honestly, I wanted to stay at home and watch cartoons on Saturday,” Womack joked.

After being recruited from Georgiana Training School to Greenville High School in pursuit of music, and later performing “Hello Dolly” alongside Roberta Gamble and the Old Gym Players, the Ritz became a pivotal part of his development as an entertainer.

“I was one of he first people of color to actually enter through the front door of that theater, and it was because of coming through drama and through Roberta Gamble, and that connection really just heightened my interest in Greenville and the theater in particular,” Womack said. “So walking in and playing on that stage … it’s an emotional experience for me, even to this day.”

As a current resident of Media, Pa., Womack is afforded few opportunities to come home, and a sad note of illness or a passing in the family often accompanies them when they do.

But being able to experience Greenville under much better circumstances granted a chance to see the city’s flourishing cultural development since his last visit.

“Beyond question, it has changed for the better,” Womack said. “I believe the Ritz Theatre, by being community based and attracting those from all segments of the Greenville population, serves as a beacon for young talent and those who have a creative or artistic yearning. And I believe that with a continued structure, flow and a steady schedule of events, that is nothing but a positive.”

And though a distance of nearly 1,000 miles separates Womack from the place he once called home, his passion for music — and spreading that passion to others — has formed an unbreakable bond.

“I really am proud of the connection that I have to the Ritz Theatre, and (Greenville Area Arts Council Executive Director) Nancy Idland in particular,” Womack said. “The Ritz has been a wonderful vehicle for me in expressing my music, and I’m hoping to expand that and allow Butler County and surrounding counties to bring and enhance my passion for music so that it might be exposed to younger students who may have the same type of interests that I had at that age.”