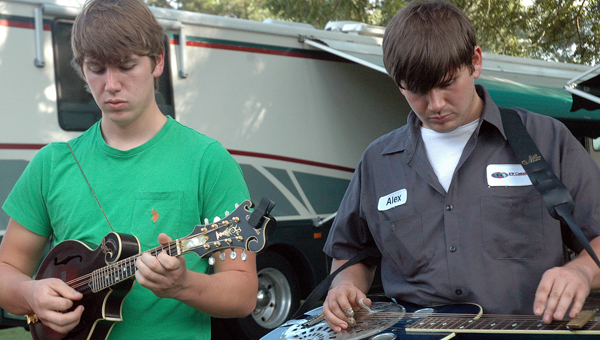 Ask Alex and Lee Benton why they’re rushing from work to Rex’s Bluegrass Festival in the sleepy town of Henderson and they won’t hesitate. They’re “learnin’ the licks.”

The Benton Brothers and Company are one of the most popular bluegrass/gospel bands anywhere around. So, why would they need to learn licks?

The Benton brothers had joined a jam session Thursday afternoon and being around the “old” pickers is where the learning goes on, Lee said.

Alex said that the old-time pickers are always willing to share their knowledge with others.

“If one of them sees that you’re having trouble with a song, they’ll usually stop and show you what you need to know,” he said. “And, if you ask somebody, it seems like they’re glad you did.”

Allen Senn might be considered one of the old timers and he’s always willing to stop picking and talk bluegrass.

Rex Locklar’s fall Bluegrass Festival officially opens today. But don’t tell that to the bluegrass pickers and grinners that have been “set up” since Monday.

“It’’s like family over here and we can’t hardly wait to get here,” Senn said.

Jam sessions will be in dozens of different places with all kinds of music being played from sunup until the moon hides its face tonight and Saturday.

Rex said that the music never really stops because, when one group stops another picks right up.

“You can go from one pickin’ to the other,” Locklar said. “Somewhere you gonna find the music you like to play or listen to and that’s where you’ll light down.”

Rex’s Bluegrass Festival is not affected by what goes on in the world around it. Folks there forget their worries and troubles and enjoy the best music in the world — bluegrass — and the company of the best folks in the world.

Admission is $5 a day and “that includes the night.”

“You can pay more if you think it’s worth more than that,” Locklar said.

“And, if you ain’t got five dollars, see me and we’ll work something out. Bluegrass is too good to miss out on.”