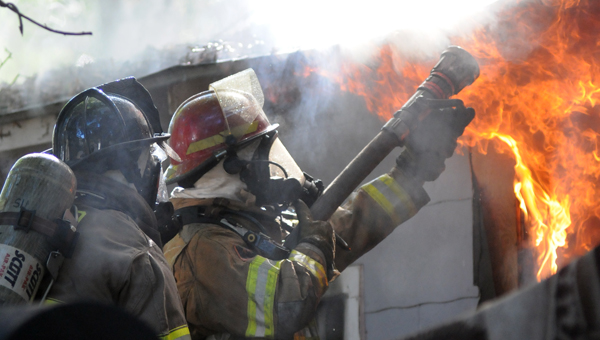 Crews responded at approximately 9:30 a.m. When they arrived they found the house engulfed in flames.

Sgt. Andy Beck, with the Greenville Police Department, was first on the scene.

Beck said when he arrived there were people in the yard yelling that someone was in bed in the house.

Beck rushed in to search the home, but heavy smoke and the heat from the flames prevented him from searching the entire house.

“When I pulled up I could see smoke coming from the back of the house, and I knew that if someone was in there we had to get them out,” Beck said. “I went in and smoke was everywhere. I had my flashlight out, but I couldn’t see anything. I made it to the bedroom and felt the bed and didn’t find anyone.”

When firefighters arrived on the scene they performed a search of the home. It was found to be vacant.

“There were three people in the house when the fire started, but they were all able to get out before we got there,” Chief Chad Phillips said.

No injuries were reported.

It took firefighters more than an hour to knock down the blaze.

“We know it started in the kitchen,” Phillips said. “By the time we arrived on the scene we could see flames coming from the back of the house.”

According to Phillips, the fire quickly spread to the attic, which forced firefighters to battle the fire from outside the house.

“The ceiling in the back room was already partially collapsed, and I didn’t want anyone under that when it came down, so we had to fight it from outside, but we were able to get it under control and eventually get the fire put out that way,” Phillips said.

Firefighters were also able to prevent the blaze from spreading to neighboring houses.