A phone call from Mama 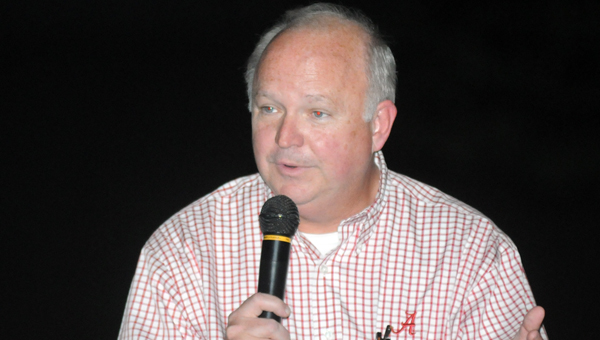 Jo Bonner got a call earlier this year that changed his life.

Caller ID showed that it was Robert Witt on the other end.

It turned out to be “mama calling.”

It was a dream job for Bonner. The only problem was he already had a job that he was passionate about.

Bonner, a 1978 Fort Dale Academy graduate, was the congressman for Alabama’s 1st Congressional District. It’s a position he had held for more than a decade. While in Congress, Bonner served on the House Appropriations Committee, as well as three key subcommittees: Defense; Commerce, Justice & Science; and Financial Services.

Bonner, who served as the keynote speaker at the Alabama Alumni Association Butler County Chapter’s meeting Thursday night, said he wrestled with the decision of whether or not to leave Congress for the University of Alabama.

Like legendary Alabama head coach Paul “Bear” Bryant, who famously explained his decision to return to Alabama by saying, “Momma called. And when Momma calls, you just have to come runnin’,” Bonner couldn’t say no to his alma mater. Mama had called.

In August, Bonner stepped down from his seat in Congress.

“It was not an easy decision,” he said. “I never like to leave in the middle of job, but mama had called.”

But while Bonner’s job title has changed, his goal has not.

Bonner, who was instrumental in the state bringing Airbus to Mobile, cited the aircraft manufacturer’s decision to locate in Alabama as an example of how the University of Alabama can influence economic development.

“Airbus chose to come to Alabama in part because of the University of Alabama,” he said. “They knew that they would have an educated workforce ready to go to work and build the No. 1 airplane in the world. That’s a different Alabama than we grew up in. … Our university is special, and I believe it will help change the life of (the State of) Alabama like it changed our lives.”