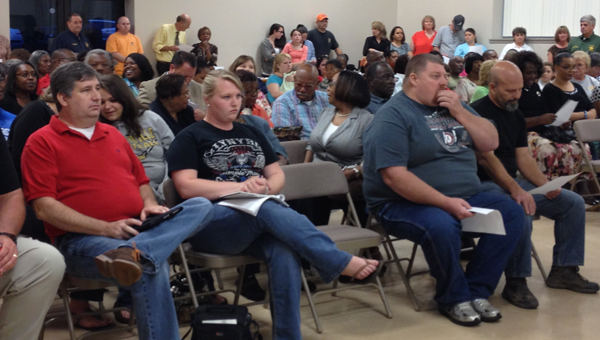 A near capacity crowd was on hand for Tuesday night’s Butler County Board of Education meeting. A discussion about the superintendent’s contract was removed from the agenda after a threatening phone call was made to Superintendent Darren Douthitt on Tuesday afternoon. (Advocate Staff/Andy Brown)

Amid a threat of violence, the Butler County Board of Education removed an item from its agenda concerning the superintendent’s contract.

The original agenda posted for Tuesday night’s regular meeting included a discussion of Superintendent Darren Douthitt’s contract. Board of Education President Mickey Jones said the item was removed after a threatening phone call was made to Douthitt Tuesday afternoon.

“We were afraid that someone might get hurt because someone couldn’t control their temper,” Jones said while addressing a standing room only crowd.

Butler County Sheriff Kenny Harden said that Jones contacted him about the threat just before 5 p.m.

“I was able to talk with Mr. Douthitt and find out who he believed made the threat,” Harden said. “I then talked to that person before the meeting started, and they assured me that they didn’t mean what they said as a threat. They didn’t stay for the meeting.”

However, there was an increased law enforcement presence at the meeting.

“Anytime we have a threat, we take it seriously, and we had deputies and (Greenville Police Department) officers here tonight to make sure that the meeting went smoothly and that no one was hurt,” Harden said.

Harden said no charges will be filed in connection with the threat.

Following the Tuesday’s incident, Greenville Police Chief Lonzo Ingram stressed the need for authorities to be notified of threats in a timely manner.

“Anytime we have a threat we take it seriously, and we need to be notified immediately so that we can take the appropriate action,” he said. “In this case, we weren’t notified until minutes before the meeting. Nevertheless, any elected body, whether it’s the water board, the city council or the board of education, can be confident in knowing that they can carry on their meetings without the threat of violence or intimidation because law enforcement will not tolerate interfering with governmental operations.”

Dale Gates, a parent of students in the Butler County School System, said he was upset with the Tuesday’s events.

Jones asked for unity from those in attendance.

“I plead to you tonight that we not be a house divided,” he said. “God put us here for a purpose to make sure these children get an education. We all need to come together for the children’s sake.”

Jones said the board will discuss the superintendent’s contract at a future date, however that date has not been set.

“The board will decide when the superintendent’s contract will be discussed, if it will be renewed or not, and we’ll do it on our own time,” he said.