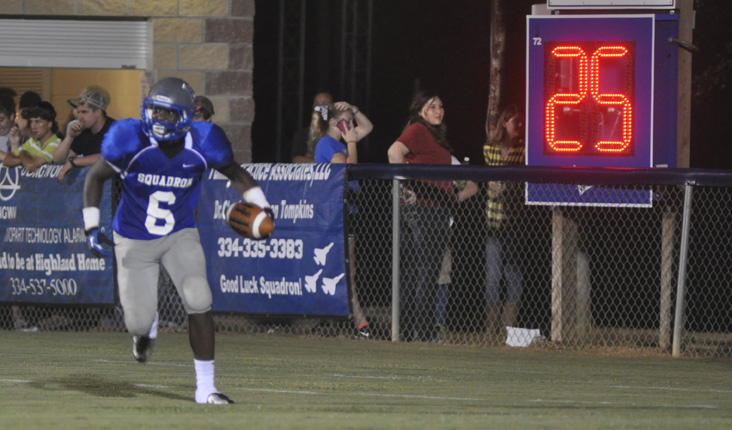 The Flying Squadron of Highland Home soared to a 55-6 victory over Zion Chapel on Friday night.

Squadron quarterback Lewis Johnson struck first with a 26-yard run with 10:38 left in the first.

The PAT by Andrew Akers was good.

Highland’s Chris Wooten put another one in the end zone with 6:50 left in the first on a 10-yard run.

Wooten ran 93 yards for the Flying Squadron’s third touchdown of the night with just less than six minutes left in the first half.

Highland’s Quin Posey intercepted a pass from Deal with 4:52 left in the second quarter, which set up a 39-yard TD run by Donate Lee with 4:05 left in the quarter.

Lee put another TD in the endzone with 1:42 left in the half, and the PAT was good.

Wooten had his third TD of the night with 7:27 left in the third quarter, and the extra point was successful.

Johnson added a 1-yard touchdown with 2:17 left in the third, and the Squadron’s extra point was good.

Deal scored a two-yard TD with 7:11 left in the fourth quarter.

Kori Bell scored the Squadron’s last TD of the night with 3:10 left in the game, and the extra point was good.

Squadron head coach Tom Pinkston said he made some changes to his team after last week’s loss to region opponent and county rival Luverne.

“We put Lewis (Johnson) at quarterback,” he said. “It was a good move for us. We did a lot better this week.”

Pinkston said his team came out a little sluggish.

“They definitely stepped it up in the second quarter,” he said.

Looking ahead to county rival Brantley next week, Pinkston said they’d need to have a great week of practice.