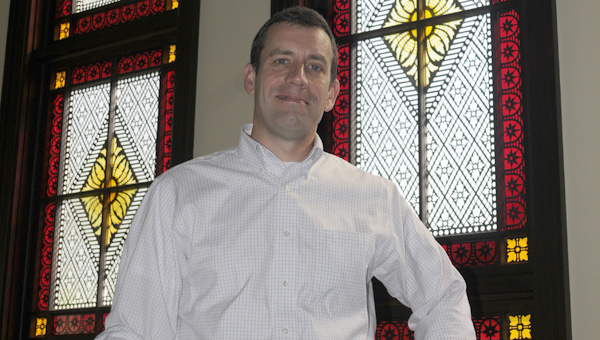 From the 630-foot monument that is the St. Louis Gateway Arch to the mountainous railways of Chattanooga, Tenn., Rob Fossett has seen his share of wondrous sights.

But the new pastor of First Presbyterian Church said that, every once in a while, less is more.

Born and raised in Chattanooga, Fossett served as the Presbyterian campus minister at St. Louis University, as well as the assistant pastor of worship and education at Trinity Presbyterian Church, also in St. Louis.

But after spending a considerable amount of time away from his roots, it was the decision to come back home that landed Fossett, his wife, Meg, and his three sons squarely in the middle of Greenville.

“Having been in the Midwest for 15 or so years, I was looking to come back to the South,” Fossett said. “I knew Montgomery a little bit, but I didn’t really know Greenville at all. I just inquired about it, and had a marvelous introductory phone conversation with Calvin Poole. We came down to visit and to interview, and had a fabulous time.”

A phone call and a few weeks later, and Fossett found himself the shepherd of an altogether different flock.

And though Greenville immediately struck Fossett as the typical small, Southern town —replete with friendly faces, politeness and southern hospitality — that didn’t stop Fossett from being caught a little unawares by his new church family’s kindness.

“I’ve worked in several churches over the years, but this church has just completely floored us,” Fossett said. “We’ve been overwhelmed by the kindness and generosity and welcoming hospitality. We just can’t believe how wonderful they’ve been.”

The Camellia City itself has had a similar effect, with the true examples of Southern kindness extending far beyond the walls of First Presbyterian.

But general friendliness isn’t the only advantages Greenville has to offer.

“Of course, the difference is much smaller numbers, but I love it — it’s a lot better than the traffic I was dealing with by a long shot,” Fossett joked.

“But besides the fact of its incredible historic origin, it’s just a great group of people,” Fossett said. “My wife and I have jokingly been referring to (the move) as though we played the lottery and won. It’s not the case, but we feel like we had the winning number, and we can’t believe how blessed we’ve been in all of this.”