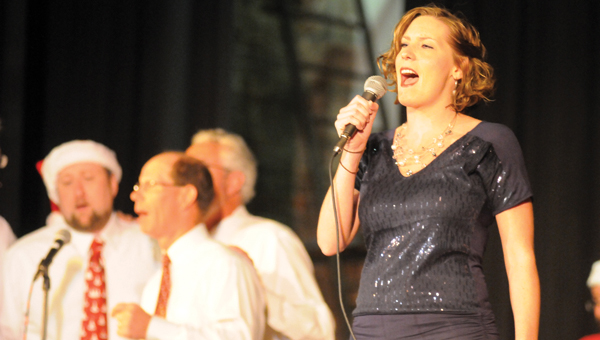 This season the GAAC is bringing back its “Christmas at the Ritz” show, which features the Ritz Players performing a number of holiday favorites. Pictured are Vickie Russell, Tommy Ryan, Tom Payne and Kevin Pearcey. (File Photo)

The Greenville Area Arts Council recently announced the lineup for its 32nd season.

This season’s performances will feature shows ranging from smooth jazz to a Broadway musical.

“After 32 years of bringing professional shows to our town, we are still going strong,” said Nancy Idland, GAAC executive director. “Roberta ‘Miss Bobbie’ Gamble, our dear friend and mentor, taught us well the importance of offering a little taste of the arts to the great people of Greenville. Our lives have been enriched thanks to the Ritz being available for all people to use, and thanks to the caliber of shows that have graced its stage. The shows we offer are selected with lots in mind. We of course have to look at pricing. Shows must be sought out that can fit onto our stage also. Of course we want to have lots of variety and not repeat ourselves too often. This season offers a little something for everyone.”

This season the GAAC is bringing back its “Christmas at the Ritz” show, which made its debut last December.

“Christmas at the Ritz” features the Ritz Players performing a number of holiday favorites.

“Our Christmas show was a great success last year and was added as a part of the regular season as a thank you to our season ticket holders,” Idland said. “Many people have asked to see more of our local actors on stage, so they asked for it, they got it. Christmas at the Ritz will feature all of the wonderfully talented Ritz Players singing and dancing. (Those who attend) will be ready for the holidays after the show and are guaranteed to leave the theater singing.”

“Christmas at the Ritz” will is scheduled for Dec. 7.

This season’s slate of shows will start with WoJamm and Shiron Denise on Oct. 10.

“Anthony Womack, a Greenville High School graduate will take the stage with his wife alongside and their Detroit-based band,” Idland said. “Greenville will be wowed by their smooth jazz sounds with Anthony on keyboard and trumpet and Shiron leading the vocals.”

On Jan. 21, the sounds of The Eagles will fill the Ritz Theatre as the GAAC presents “Hotel California: The Original Tribute to The Eagles.”

“Tribute shows have become very popular and this year we offer one that everyone is sure to enjoy,” Idland said. “Who doesn’t like at least one or two Eagles’ songs?”

The GAAC will cap its 32nd season on Feb. 25 with “The Fantasticks,” which is one of Broadway’s longest running shows.

“’The Fantasticks’ is a story that all audiences will enjoy and music that many will want to sing along with,” Idland said.

All four shows will begin at 7 p.m. at the Ritz Theatre.

A season pass to all four shows can be purchased for $40. Tickets to each individual show are $20.

“A season ticket is the way to go,” Idland said. “Those individuals joining the GAAC are invited to attend post performance parties to meet the actors. The first party of the season will be held at High Horse Gallery. We are delighted that Mary McKinley has graciously opened her business to our membership after the concert on Oct. 10.”