Luverne rallies back to 32-15 win over Goshen 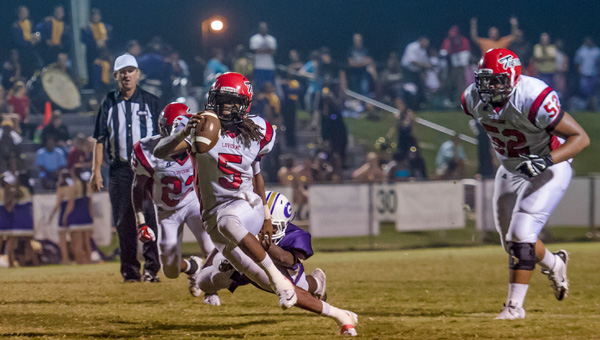 By Devin Smith
A week after its home opening victory over the Brantley Bulldogs the Luverne Tigers traveled to Goshen to face the Eagles on Friday night and took the 32-15 victory.
The Eagles played a much better game this week and hung in with the Tigers for three quarters before Luverne pulled away by scoring 19 points in the fourth.
“Well we were fortunate to win,” said Dubose. “Goshen played better than we did, they were coached better and were better prepared, they deserved better than what they got.”
Late in the second quarter Goshen held a 9-0 advantage before Tigers receiver Preston Sankey returned a punt for a 40-yard touchdown with 48 seconds remaining to cut the lead down to just two points.
“It was huge going in,” said Dubose. “It gave us a chance to get back in the game.”
The return was a crippling blow to the Eagles, and one that Snyder feels should have played out in a different manner.
With momentum on the Tigers side, runningback Jonathan Chambers then took the opening offensive play of the second half 69-yard to the house for a 13-9 lead and would never look back.
Quarterback Kenterius Womack played a great game for the Tigers, finishing 9-20 with 69 yards passing and eight carries for 91 yards and two touchdowns.
The Tigers also had a few mistakes in the game, particularly with turnovers.
Dubose was not pleased with his teams performance as a whole, and turnovers were a large portion of that.
“We had some long runs for big plays,” said Dubose. “We had some pressure and turned the ball over way to many times for the second week in a row, you are not going to beat good teams if you turn it over the way we have been doing. We’ve got a long way to go.”
Eagles coach Bart Snyder was proud of the way his team performed against Luverne, partially because he was aware of the evident talent of the Tigers squad.
“We played the best team we’ll play,” said Snyder. “We really feel that way. Luvurne plays 11 on offense and 11 on defense, my hat is off to coach Dubose and his team with what they did.”
As for Dubose, the victory in noteworthy but in the grand scheme of what he wants to accomplish his team still has a ways to go.
“Well we found a way to win, found some guys that made plays in critical situations for us,” said Dubose. “But as far as 11 guys and coaches doing the little things and being positive we are a long way from being a good football team.”
The Tigers will hope to showcase the improvements Dubose mentioned this Friday when they face Highland Home, who they defeated 20-16 last year.