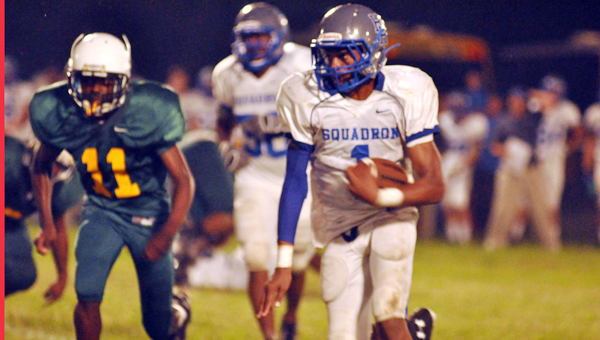 The Flying Squadron of Highland Home shell shocked the Central High School Lions in their own den Friday night 23-0. “It wasn’t a good effort at all on either said of the ball,” was about all Central head football coach James Bibb could say for his team which racked up 76 yards in penalties and zero points. “I was real disappointed because I know we are a better football team than this,” Bibb said.

“I though we played better than we did last week, “said Highland Home head football coach Tom Pinkston.

Pinkston said some of his kids who had not been playing did a good job of stepping in for some of his players who will be back with the team next week. “Our defense played well. We didn’t let them score. And they (the defense) kept us where we could stay in the game and do our job,” Pinkston said. He noted the play of quarterback Tay Fuller, “Who ran the offense like we wanted him to.” Pinkston declined to single anyone out on defense, however.

He simply called it a “good team defense” effort for which he said he was proud. Fuller was the leading rusher for Highland Home with 106 yards on 18 carries and three touchdowns. However, he went 0-3 in passing.

Andrew Akers added three point after touchdown kicks. And the Flying Squadron defense forced Central into one safety. The contest wasn’t pretty for either team with Highland Home racking up 50 yards in six penalties to 11 penalties for 75 yards for Central. One highlight for Central was T.J. Saffold, who rushed 22 times for 76 yards.

The Flying Squadron led 9-0 at the end of the first quarter following a bad snap over the Central punter’s head at the 1:11 mark. Fuller next scored on about a 38-yard run with 39 seconds left in the quarter. And Akers added the PAT.

Fuller scored from about 1-yard out with less than 44 seconds left in the half, and Akers added the PAT to make it 16-0. Fuller scored again at the 8:25 mark of the third quarter from about 3 yards out. And the PAT made it 23-0. The Flying Squad will travel next week to Luverne for a regional contest. And Central will travel to Elba High School next week seeking its first regional win of the season.