McKenzie held on late to beat Highland Home 16-14 on the road Friday night.

The Tigers hit the end zone first on a fumble recovery with 11:11 from Branden Miller in the first.

McKenzie scored again on a safety on a tackle from Seth Kenney.

Neither team could get anything going in the second quarter, and McKenzie was up 8-0 at the break.

McKenzie came out in the second half with a nearly 80-yard touchdown run from senior Nicarius Peterson, and the Tigers were able to complete a two-point conversion.

Highland Home’s Tae Fuller scored from 21 yards out with 1:31 left in the third quarter, and the Flying Squadron had a successful two-point conversion.

With 2:52 left in the game, Fuller struck again from 5 yards out.

A host of McKenzie defenders halted the two-point conversion.

McKenzie head coach Josh McLendon, in a team meeting after the game, that his boys “got after it hard, and deserved the win.”

McLendon said the next week’s game against Georgiana is a “big game,” and they needed to “clean up some mistakes.”

“We had opportunities we couldn’t execute,” he said. “We didn’t give up any TDs on defense, but they still beat us. We missed assignments. We had a lot of self-inflicted wounds, and McKenzie made the most of it. They did a good job.”

Looking ahead to Central-Hayneville next week Pinkston said his team will have to regroup and grow up.

“We have kids who didn’t play last year,” he said. “They have to learn how to handle adversity.” 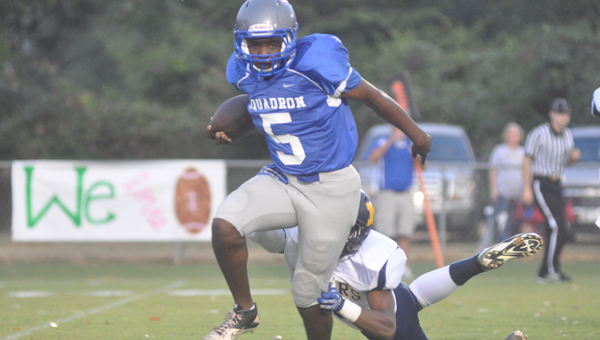