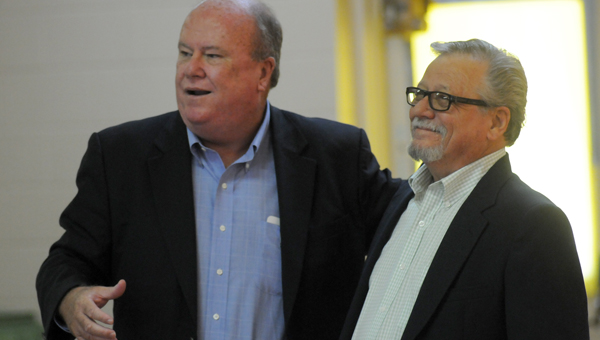 On Wednesday, Captain Garry Martin of the Greenville Police Department found himself surrounded by family, friends, co-workers and local dignitaries.

They came together to honor and celebrate Martin’s 40-plus years fighting crime in New Mexico and Alabama. His official retirement date arrives Sunday (after eight months of terminal leave to use up accrued sick leave and vacation time).

The law enforcement veteran admits he never envisioned he would spend so many years carrying a badge.

“When I got out of the Air Force in 1968, I had my wife, Lynn, and a son, Gary Dean, to support,” Martin explained. “The years flew by and before I knew it, 20 years had passed and I was retiring from the Bernalillo County Sheriff’s Department in Albuquerque, N.M., as a captain.”

During those years in Albuquerque, Martin found himself facing some harrowing experiences, both personal and professional.

“One morning around 2 a.m., I had a hostage situation. The suspect surrendered, but as we entered the residence, he changed his mind and started shooting,” Martin said. “I dove into a bathroom. I remember bullets flying all around, coming through walls and zinging right by my head.”

The officer was finally able to get out of harm’s way and “the suspect was taken without anyone getting hurt, thank goodness.”

One of the hardest things, then and now, for Martin is dealing with the traffic fatalities involving young people. For him, it’s heart-achingly personal.

Looking back on a career that has had its share of grim moments, Martin says there has also been a lighter side to it all.

“We had a lieutenant with a phobia about graveyards. He was terrified to go in one, especially at night,” Martin recalled.

“One evening we received a call from one of the rural cemeteries and the lieutenant was called to supervise the scene. Someone had been desecrating a grave … next to that grave was a freshly dug hole.”

The lieutenant stepped out of his cruiser and put on his hat, Martin said.

“He reluctantly came over to where we were standing. One of the deputies had gotten in the other grave and reached up and tugged the lieutenant’s pants leg. The lieutenant turned around so fast his face was pointing in one direction and his hat in the other! Ran like a scalded cat to his unit and peeled out of there. That’s one of the funniest things that happened.”

After his retirement in New Mexico, Martin and his second wife, Ramona, decided it was time for a change.

“Work opportunities were limited there and my retirement pay didn’t go that far,” Martin said. “Ramona’s family is from this area and after visiting Greenville, it just seemed like this place was a perfect fit for us.”

He admits it was a “huge culture shock” settling into life in a small and friendly southern town after the drugs, guns, gangs

and violence experienced back in New Mexico.

“Compared to Albuquerque, the pace was much slower. I honestly thought I must look like somebody from around here; people kept waving at me,” Martin recalled with a chuckle.

While he kept his home phone number unlisted in Albuquerque, here you will find Martin’s name has always been listed in the book.

He’s even had people turn up at the door of his Park Street home to turn themselves in on a warrant.

“One man actually caught me as I was leaving for church, and very obligingly waited on our front porch until we could return,” Martin recalled.

And the officer who learned to be suspicious of any food or drink offered by members of the public in New Mexico finds himself rewarded with delicious homemade baked goods by grateful L.A. (Lower Alabama) citizens.

Looking back, looking ahead

Martin has seen a lot of changes since he started his law enforcement career in 1968.

“Back then, drugs were around but it was mostly marijuana for the younger folks and heroin for the older ones,” he recalled. “Now, drugs are a lot more prevalent, and we are seeing more violent crimes being committed by youthful offenders.”

And it’s gotten tougher for the men and women in blue to do their job, he believes.

“When I first started work, an officer’s word was valued. Now, we’ve become a very litigious society,” Martin said. “Cell phone cameras are everywhere and officers have to justify every move they make and every word they speak. They often second-guess themselves, and in a life-threatening situation, it can end up costing them their lives.”

Asked what he considered the best advice he’d give to any rookie, Martin replied, “It boils down to the Golden Rule: treat everyone the way you would like to be treated.”

With his official retirement finally here, what are his plans?

“I have a 150-year-old house. My wife has been filling up the ‘job jar’ for years,” Martin said with a laugh.  “I have to say the thing I have enjoyed the most about serving the GPD has been getting to know the people of Greenville and being in a position to help them when they needed it.”