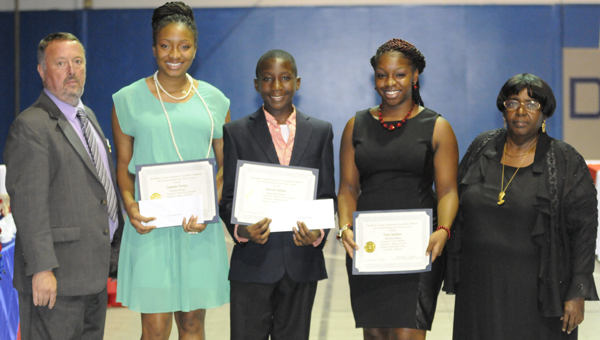 “The older heads are not participating, and we’re really trying to bring the younger crowd in and, as the older folks would say, put a fire under them.”

Guest speaker Cromwell Handy, director of Alumni Relations at Alabama State University and pastor of Montgomery’s Dexter Avenue King Memorial Baptist Church, provided most of the kindling for the night with his message of inspiring others to better their community.

According to Handy, the three most important facets for building a healthy community are unity, peace and love.

But the guest speaker wasn’t the sole focus for the night’s events, as equal emphasis was placed on the essay contest portion of the banquet.

Though the contest was light on entrants—Teria Davidson from Georgiana School, Gabrielle Perdue from Andalusia High School and Dawson Sarblah from Greenville Middle School—the subject matter of their essays left a lasting impression.

Deidra Womack, president of the Butler County Optimist Club, said that the essay contest portion of the banquet was created to spark the interest of young people with the Democratic Party.

“We’re missing out on that with our young people,” Womack said.

“Particularly with cell phones and quick texting, everything is so abbreviated.    So we just felt that the more that they write, the easier it will be for them to write and create.”