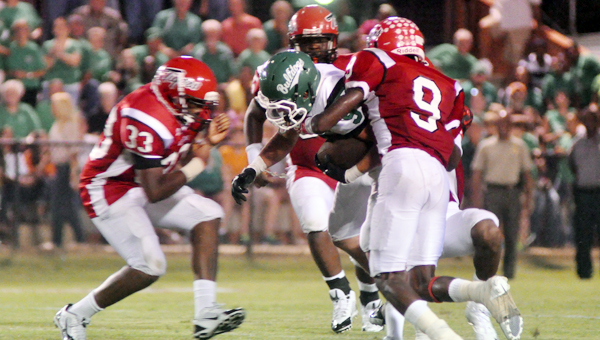 A host of Luverne defenders take down a Brantley player.

The Tigers have won 42 of the 71 games the teams have played.

Luverne started off its scoring with a touchdown from quarterback Kenterius Womack with 9:54 left in the first. Brantley blocked the point after.

Brantley got on the board in the second quarter, when running back Andrew Parker scored.  The Tigers blocked the extra point.

Luverne scored again with 1:30 left in the second, with a TD from wide receiver Quez Watkins, and the PAT was good, putting the Tigers up 13-6 at the half.

Luverne’s Preston Sankey scored first in the second half, putting his Tigers up 19-6.

With 4:32 left in the game, the Tigers struck again and pulled off a two-point conversion to go ahead 27-6.

Watkins put another one in the end zone, with 1:44 left in the third for the Tigers’ last score of the night.

Brantley put two more touchdowns on the board in the fourth, but it wasn’t enough to pull out the W.

Brantley sophomore Kenyada Teague scored and the point after was good to give the Bulldogs 13.

Senior Willie Daniels scored the last TD of the night with 1:22 left on the clock.

Brantley head coach Ashley Kilcrease said he felt like his players “did good.”

“We made mistakes, but they’re young,” he said. “I felt like we needed to get in there at the halftime. Obviously, Luverne had a big play. I’m proud of our kids. Giving up would have been the easy thing to do, but they kept going. Luverne has a good team, and I tip my hat to them.”

Luverne head coach Mike Dubose said his team did some good things individually, but collectively they had too many breakdowns and missed assignments.

“We need to do things that good football teams do,” he said.