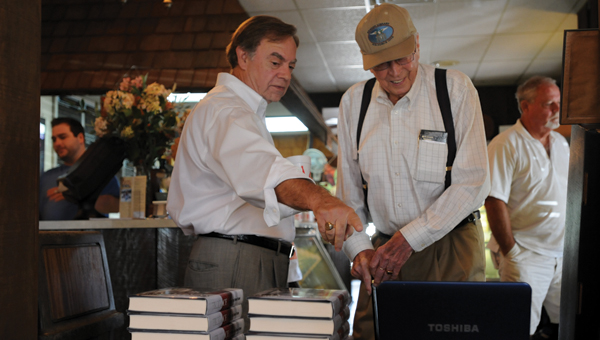 George Wallace Jr. chats with Bill Bates at a book signing at Bates House of Turkey in August of 2012. (Advocate Staff/Andy Brown)

Bates was well known across the state, not only for his free-range turkeys that are raised on the family’s nearly 900-acre farm in Fort Deposit, but also for his role in helping the state celebrate Thanksgiving.

For more than six decades, Bates has provided a turkey to the sitting governor each November as Thanksgiving approaches. The governor then pardons the turkey, which is always named Clyde.

The tradition started in 1949 when Bates took the first Clyde to Gov. Jim Folsom to be pardoned.

It’s become a Thanksgiving tradition in Alabama, and one that Bates’ daughter, Becky Sloane said the family will continue.

Francine Wasden, executive director of the Greenville Area Chamber of Commerce, said that Bates helped put Greenville on the map.

The Bates family has operated Bates Turkey Farm since 1923.

After the construction of Interstate 65 began to draw customers away from the Bates’ farm, which is located in Fort Deposit along Hwy. 31, Bates decided to open a restaurant in the Camellia City.

At the time, the eatery mostly offered sandwiches on its menu.

It proved to be a recipe for success.

Bates House of Turkey’s hickory smoked turkey sandwich has been featured on the “100 Dishes to Eat in Alabama Before You Die” each year since 2005.

Bates remained active in both the family farm and restaurant even as his health declined.

That was no surprise to Charles Jones, who served with Bates in the Rotary Club of Greenville.

“He believed in hard work,” Jones said. “He was that kind of man.”

Jones also described Bates, who was a World War II veteran, as a family man and a patriot.

“He loved his family, and he loved America,” he said. “He was very patriotic and that led him to become involved in politics.”

Beth Chapman, the former secretary of state and a Greenville native, called Bates “one of Alabama’s most loyal Republicans.”

Gov. Robert Bentley called Bates “one of the finest men” he knew.

“A veteran of World War II, Bill served his country with honesty and integrity,” Bentley said. “He was a member of the greatest generation, who loved God, his family and his country.”

Thomas Ellis, co-owner of Priester’s Pecans in Fort Deposit, said that Bates’ passing is a loss for Lowndes County.

“Personally, he’s one of the best friends that I have and also he’s one of the best friends that this county’s had,” Ellis said. “He’s an example for how a family can work hard together to make something out of nothing and turn it into a real successful business, and he’s a great example for all of us. We are going to miss him, and we send our best wishes to his family.”

Robert Harris, a member of the Lowndes County Commission, said he believes Bates’ legacy will live on.

“From what I can tell in the past, what I knew about him, he was highly intelligent and was a good businessman because he made money,” Harris said. “He did it honestly, as well. We definitely send out our sympathy to his family in their time of loss and hope the best for them in the future and hope that they continue carry the Bates name on and his name will live on.”

A funeral service will be held at 11 a.m. Thursday at Little Sandy Ridge Presbyterian Church in Fort Deposit. Visitation will be held from 6 p.m. to 8 p.m. Wednesday at Dunklin & Daniels Funeral Home in Greenville.

Liz Edmunds, star of BYU Television’s “The Food Nanny,” presented a workshop Saturday at the Butler County Board of Education.... read more