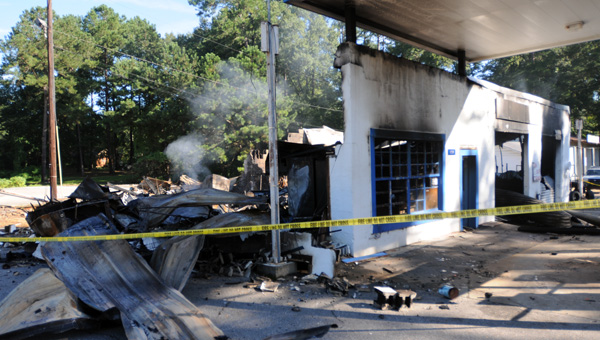 The Georgiana Gas and Garage Service Station caught aflame early Wednesday morning. An ongoing investigation has been launched to determine the cause.

Amber plumes rising into an early morning sky signified the funeral pyre for not just one of Georgiana’s most popular hangouts, but also a nearly 80-year-old pillar of the community.

At roughly 1:45 a.m. on Wednesday morning, the Georgiana Fire Department received a notice that a smoke alarm had inexplicably gone off inside the Georgiana Gas and Garage Service Station.

And, despite arriving to the scene after only four minutes within being alerted, the establishment was deemed unsalvageable.

“We had heavy smoke blowing out of the building, and within five minutes we had flames coming out,” said Georgiana Fire Department chief Alvin Dantzler.

“The roof started falling in because they had a tar roof with tin on top of it.  We fought it for over two hours, but it was a total loss.”

Also among the first responders to the scene of the fire was owner Larry Creech.

Despite being a volunteer firefighter with the department for a number of years, Wednesday morning’s call was one that he was ill prepared to answer.

“It was a different way of looking at it—I’ve been to hundreds of calls and I’ve been a firefighter for roughly 25 to 26 years, and I’ve never had nothing of mine burn,” Creech said.

“But when I heard the address, I knew what it was.  I have a new attitude and outlook on life as far as being a firefighter because, until it touches you, you don’t realize how it feels.”

Creech has owned the Georgiana Gas and Garage Service Station for nearly 10 years and, throughout that time, his procedure for closing up shop never changed.

Creech said that as he left the building that Tuesday evening at approximately 5:15 p.m., he did his normal closing and everything appeared to be in order.

Georgiana Police Chief Isaac Ward said that although the strange case remains an ongoing investigation, it’s too early to rule anything out.

“It was later determined that it could possibly have been foul play involved, and the state fire marshals were called in to help on the investigation,” Ward said.

“I’m not going to say there is, but it could possibly be foul play.  So we’re just checking on every angle there is.”

And though Creech’s near decade-long investment of time and energy literally went up in flames Wednesday morning, he said that the loss to the entire community was perhaps even greater.

For many members of the Georgiana, the station was more than a place to buy gas, tires, get an oil change or pick up a snack.

It was the town’s own piece of preserved history.

“It’s an icon of the community because for years and years, all of us old goats needed a place to talk and get a Coca-Cola and get a bag of peanuts and gossip,” Creech said.

“In this economy, you don’t make a lot of money no matter what you’re doing like that, but it was somewhere for me to go for the past 10 years, and I enjoyed it.  I will miss it—I miss the people already.”