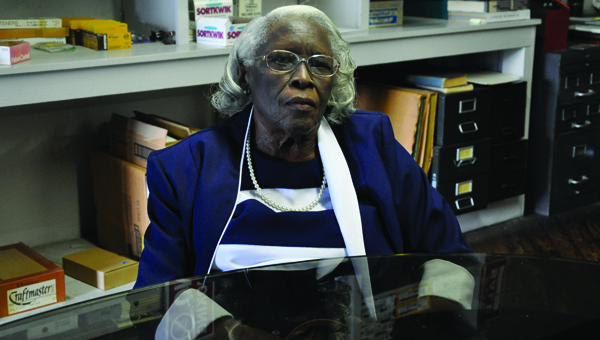 Verbie Holston may be 90 years old, but don’t let that fool you, she’s sharp as a tack.

The recently turned nonagenarian has made her mark on school children in this county for 33 years before retiring in 1983.

“I taught at three different schools,” she said. “I take in Dozier, Honoraville and Highland Home.”

She received her education at Alabama State College, now ASU, after being motivated by her high school history teacher to pursue a degree in education.

Holston said she enjoyed her time as an educator, but said she’s glad she doesn’t have to teach now.

“I enjoyed meeting the children and got a long with the parents,” she said. “Then, parents knew what was going on at home, and they would tell you. You didn’t have to ask. Then you could also paddle and punish children who did not behave. I enjoyed it while I was in it, but I’m glad I’m out.”

Holston said she taught during desegregation, which she said wasn’t too bad, where she taught.

“I taught at Dozier before integration,” she said. “They sent me to a junior high school in Honoraville, where I was the only black there for two years.”

“Up there, it wasn’t too bad,” she said of the transition. “But there weren’t that many students.”

After retirement, Holston said she worked at a store briefly, worked for OCAP for six years, substituted and was a poll worker for a number of years.

“The only thing that really bothers me is driving,” she said.

She’s never been married, either.

“I took care of my parents,” she said. “I was the baby of the family and went to college and had a good job.”

She has family in Kentucky, where she travels to once a year.

So what’s the secret to living to 90?

“I didn’t drink. Didn’t smoke. Had a good diet,” she said. “We raised a lot of our own food and didn’t have to go to the grocery store much. Put God first. I think that’s what has helped me.”

Members of the Sweet Water Missionary Baptist Church, along with Pastor Daryll and First Lady Jackie Matthews will hold a 90th birthday party for Holston on Aug. 25, at 2 p.m., at the church.

The church is located at 3555 Sweet Water Road in Highland.

Due to construction, organizers say to exit Highway 331 at county road 17.