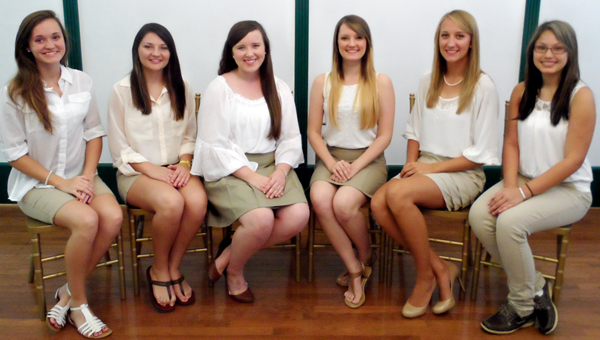 There are no crowns in the Distinguished Young Women Program.

Instead, senior high school girls are awarded a prize more valuable than any tangible trophy — the values necessary for a better future.

“It instills in girls to be responsible, to be involved, studious, healthy, and to just try to be a more well rounded girl — a girl that excels in many different areas and not just focus on outside beauty,” said Starla Jones, Butler County Distinguished Young Women Program chairperson.

And though there is some semblance of similarity to other pageants — there are talent and fitness routines, as well as other elements common to the more traditional beauty pageant — the clear distinction lies in the focus on academic qualification.

Girls’ scholastic records are taken into account just as heavily as any other factor.

High school transcripts and standardized test scores are all fair game for consideration.

The DYW Program, formerly known as Junior Miss, decided to undergo a name change to more accurately reflect the quality of its participants.

Jones said that the program’s current moniker is more appropriate than ever before.

“I think the word distinguished tells it all because when these girls are a part of this program and go through learning the routines, performing on stage and going through the interviews, they certainly have distinguished themselves from their peers who, for some reason, chose not to participate,” Jones said.

“So I think that word really sums up who we are. We are talking about young ladies that are truly distinguished and set apart.”

But Jones is hoping to extend the Butler County DYW Program’s influence far beyond its senior participants.

Through the Little Sisters program, high school juniors are able to participate and support their upperclassmen.

In addition, 15 girls from first through fourth grade were also on hand for the High Heel Boot Camp, which involved learning a routine that will be performed in the program alongside their senior counterparts.

The process of involving the younger girls is mostly to emphasize important values at a young age, but the mentorship opportunity provided is a fortunate side effect.

“We feel like the girls who participate in our program are good role models for younger girls,” Jones said. “Hopefully, by the time they get to be a senior, it will be something that they plan on participating in. The more our program grows, the more participants we can have, and possibly the more our scholarship fund can grow so that we can provide more funding to those girls that are selected.”

Right now, the program is a little below it’s goal for this year’s scholarship fund.

The deadline, originally set for July 31, has been pushed back to allow for more donations.

The competition will be held Aug. 24 at the Ritz Theatre in Greenville.