Caddell, Seale star in ‘Crimes of the Heart’ 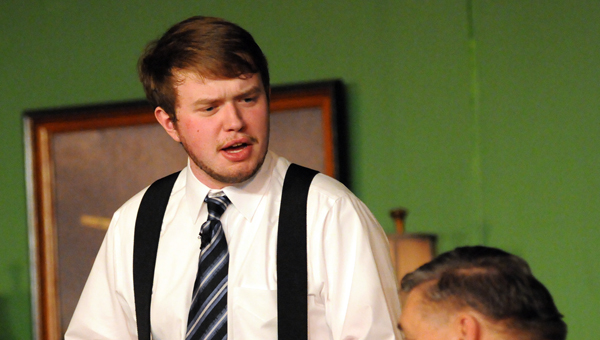 David Caddell starred in Agatha Christie’s “The Mousetrap” last August. Caddell will be performing Aug. 16 and 17 in the Greenville Community Theatre’s production of “Crimes of the Heart.” (File Photo)

The Camellia City’s theater scene is filled with veteran performers from various walks of life, but Greenville’s youngest stars might just burn the brightest of all.

Irina Seale and David Caddell are two such performers, set to star as Meg Magrath and Barnette Lloyd, respectively, in the upcoming production, “Crimes of the Heart.”

Though both have their sights set on theater at the collegiate level — Seale is attending the University of Alabama at Birmingham in the fall and Caddell has been at Troy University since 2011 — it was the local stage that paved the way for the transition to a larger stage.

“It gave me all the basic public speaking skills to be confident in what I do and never be embarrassed, because when you perform in front of your peers you’re going to get over that pretty quickly,” Caddell said.

Seale, who plans to major in biology and minor in theater at UAB, said that it was largely due to the community support and the guidance of her mentors that eased her shift into larger performances.

“In the Greenville theater, you have so many supporters and they just try to get you more comfortable and actually get you to the point where you feel like you can become your own self — a better actor,” Seale added.

“Naomi Pryor always took my sister and I to theater competitions, so we got to experience other actors and stage combat and that sort of thing.”

Seale grew up in the world of community theater alongside her sister, Lauren, and the two’s unique chemistry has been often used to great effect.

Appropriately, in “Crimes of the Heart,” the two sisters have been cast as rivaling cousins.

According to director Molly Waters, the decision wasn’t an unintentional one.

“They’ve gotten to that level now where they look and act like they’re really sisters.  Even the arguments that they have with one another are just typical sibling rivalry.”

And developing those relationships between non-familial cast members hasn’t been a difficult task, according to Caddell.

Both he and Seale view their cohorts as extended family.

“I know every single person in the cast, I’ve hung out with several of them, and they’re all nice people.”

And though the realm of theater has its share of challenges and ups and downs, the ability to share and create something with an audience is an unparalleled experience, according to Waters.

“You’re creating a world, and these are the people you’ve invited into your world and you’re just so happy to have them,” Waters said.

“That’s the brilliance and beauty that is theater, and that’s why I love it.  You really have to love it to do it, but it’s fun, and to see it come together at the end is just the most wonderful feeling.”

The curtains at the historic Ritz Theatre will rise “Crimes of the Heart” on Aug. 16 and 17 at 7 p.m.

Tickets for the play are $15 for adults and $10 for students. Advanced tickets may be purchased at The Pineapple or McFerrin’s Jewelry.