Students line up for bookbags at annual giveaway 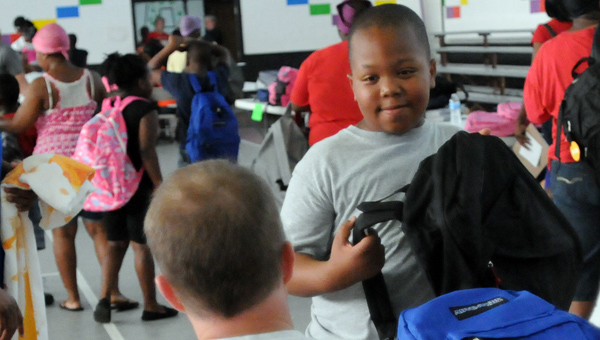 With the start of school drawing near, hundreds of school-aged children and their parents made their way to the Greenville YMCA Saturday to pick up new backpacks and school supplies.

It’s becoming somewhat of a tradition in the Camellia City.

For the second consecutive year, the City of Greenville, the Greenville Area Chamber of Commerce, the Greenville YMCA, and local businesses and organizations have teamed up to provide backpacks filled with school supplies to local school children.

In all, 550 backpacks were handed out as part of the giveaway. That’s 50 more than were passed out during last year’s inaugural giveaway.

Francine Wasden, executive director of the Greenville Area Chamber of Commerce, said the bookbag giveaway is a way for the chamber and the city to lend a hand to families during a tough economic time.

“These kids are so deserving, and they’re looking forward to school and getting back into the swing of things,” Wasden said. “And so, during this economic downturn, we’re just hoping that we can help take a little bit of the burden off their parents as far as the school supplies and the costs that come with it.”

The backpacks were filled with school supplies, ranging from notebook paper, notebooks, pencils, pens, rulers, crayons, construction paper and more, and were sorted by the appropriate grade level.

Backpacks were given on a first-come-first serve basis to students in kindergarten through eighth grade. Each backpack cost approximately $15. They were paid for in part by donations from area businesses and organizations.

Wasden praised the event’s sponsors for supporting “the very worthwhile cause.”

“It was such fun this past Saturday morning seeing the kids with smiles on their faces coming into the YMCA and leaving with backpacks, sometimes bigger than they were, hanging on their backs,” she said.

Wuerffel challenges students to have a vision