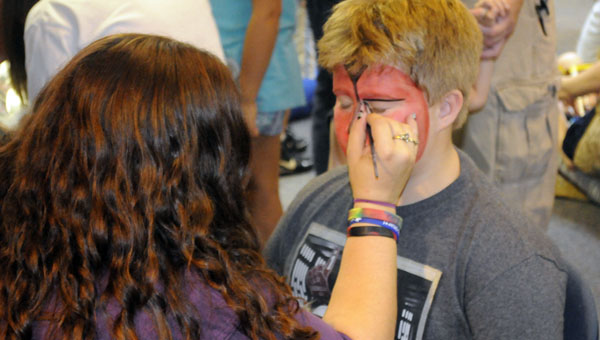 Libraries are often known for their ability to take readers to distant worlds, but the Greenville-Butler County Public Library recently took a special group of attendees to one particular galaxy far, far away.

“It was very nice to see all of those people out, and I was glad that they came out and took part in it,” said GBCPL director Kevin Pearcey. “It also spotlights the library, and it allows us to showcase what all we can offer to the public.  The ultimate goal is to get people reading, and getting people in here to see what kinds of programs we offer.”

Children and adults alike were preoccupied with a several of Star Wars-related activities, including coloring competitions, Star Wars bingo, and a variety of snacks inspired by the Star Wars universe.

Alongside the festivities, a catalog of acclaimed Star Wars novels were available for library members to check out.

But the biggest fan in attendance might have been Pearcey himself, and his screen-accurate stormtrooper costume served as convincing evidence.

Members of the organization wear screen-accurate replicas of stormtroopers, clone troopers and other popular characters,  and often make appearances at casual and charitable events alike.

The group includes more than 6,000 active members across every state and at least 49 other countries, including 60 garrison members here in Alabama.

“People may ask why a 41-year-old man is doing dressing up like a stormtrooper, but it’s a way to give back,” Pearcey said. “And when you get a whole bunch of your fellow garrison members together and you go out somewhere, it’s just fun.”

And although Star Wars has appealed to a wide swath of age groups in its 36-year history, 41-year-olds were few and far between at this year’s celebration.

Children were easily the dominant force, despite many of them not even being old enough to recall the second trilogy of film releases.

Pearcey chalked up the endearing nature of Star Wars to George Lucas, and his capturing of lightning in a bottle.

“They say he used Joseph Campbell’s ‘The Hero with a Thousand Faces’ when he wrote Star Wars, and that book speaks to his whole idea, which is that every culture has these different archetypes,” Pearcey said. “The old wizard, the young hero that’s off on a quest to defeat a villain … it taps into some of the oldest myths that humanity has.  I think it just speaks to everybody.”