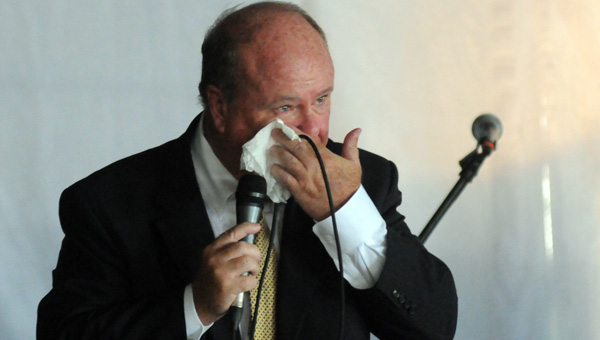 Mayor Dexter McLendon wipes a tear as he shares the story of his wife Janice’s treatment and recovery after being found unconscious in a swimming pool July 2. McLendon was invited to share the story Friday at a celebration marking Baptist South’s 50th anniversary. (Advocate Staff/Andy Brown)

On the other end of the line was his mother-in-law. When he answered, she screamed, “Dexter, Janice has drowned!”

Before the reality of what he had just heard was able to fully sink in, Dexter, along with his son Josh, rushed across town to the home of his mother-in-law to find his wife of 34 years unresponsive on the side of the swimming pool. Her brother Scottie Harper, who was off work at Hysco for the Fourth of July holiday, had pulled her from the pool.

“We beat the paramedics there, and I’ll tell you, I wish we hadn’t,” Dexter told a group gathered to celebrate the 50th anniversary of Baptist South where Janice received treatment following the accident. “She was laying there helpless by the pool, and Josh was screaming ‘Mama, you’ve got to breathe!’”

Paramedics arrived on the scene and transported Janice to L.V. Stabler Memorial Hospital where doctors and nurses worked to stabilize her. She was eventually flown to Baptist South in Montgomery.

“If Scottie hadn’t been at home and jumped into eight feet of water and pulled her out, there’s nothing the doctors could have done for her,” Dexter said. “He saved her life.”

Doctors placed Janice on a respirator and inserted a chest tube. She spent six days on a respirator in the hospital’s Surgical Intensive Care Unit (SICU). On July 8 doctor’s removed the respirator.

“When they took it out she smiled and told me she loved me,” Dexter said. “Janice is a real miracle.”

And while McLendon credited the staff at Baptist, such as Greenville native Sam Welch who serves as charge nurse of the SICU, he said the real credit goes to a higher power.

“As Josh and I were racing to the hospital, I heard a voice in my left ear tell me, ‘Calm down. Everything is going to be OK.’ Sometimes we have a hard time putting our hands around things like that, but I know that was God telling me that he was going to take care of Janice. Janice is a real miracle, and this has changed my life. This is a story I’m going to tell every chance I get, and those of you who know me know I like to talk, so I’m going to tell it a lot.”

He also thanked the community for its support.

“It wasn’t just our close friends,” he said. “It was people we don’t even know that were praying for us, and I really believe this town picked her up and helped carry her through this. That’s very humbling, and we appreciate the support we’ve received from the town.”