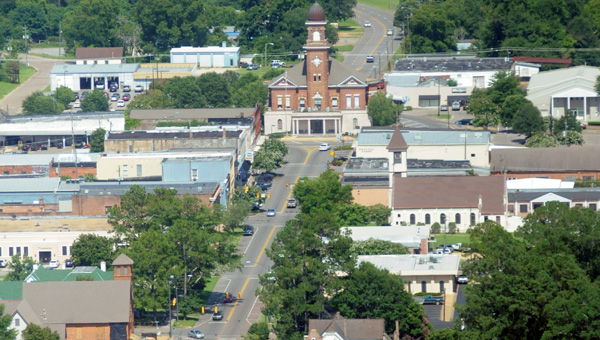 Future Commerce Street business owner Mary McKinley helmed the meeting, and tasked her fellow merchants with coming up with ideas to attract more business to the area from locals, as well as potential customers from surrounding counties.

And though decidedly little was finalized at the meeting, the group left in agreement that the pursuit of commerce for Commerce Street is a challenge that starts at home.

McKinley said that her suggestions to the group were based on several small observations that could improve the shopping experience for both owners and customers alike.

Chief among these considerations were the changing of the one-way street by the old Belk Hudson building to a two-way street to allow more parking and the elimination of unattractive garbage cans on street fronts due to the lack of an accessible back entrances for garbage collection.

“We just want to improve the look and the atmosphere downtown,” McKinley said. “When we do get somebody to come in from out of the area, we hope that they’ll tell their friends and make it a point to come back to our area.”

On October 1, she plans to open The High Horse Gallery, an art gallery featuring works for sale and classes for various styles of art such as painting, pottery, basket weaving, drawing and more.

And though much of her preparation to stimulate interest in Commerce Street business derives from self-preservation, it also stems from her love of the downtown area and its rich history, calling it the “heart of the city.”

“We’re losing our history when we let our downtown fall down,” McKinley added. “Everything does not need to be sleek, shiny and brand-new. We need the architecture from the past because it’s beautiful, and it’s hard to duplicate what craftsmen of years gone by once did.”

But paying homage to the past doesn’t mean disregarding the future, as McKinley noted that the younger generation comprises a healthy majority of downtown business.

“Shoppers today do everything on the Internet, and people who don’t keep up with that are losing out,” McKinley said. “By the time you get to my age, you have just about acquired everything you need. Young people are the ones we have to appeal to.”

And Thursday night’s turnout seemed to suggest that the entirety of Commerce Street is onboard to revitalize the area.

“What I feel like we accomplished most was that we actually had people to show up, which indicates to me that they have concerns and that they’re ready to do some things to help generate business for downtown,” McKinley said. “I was encouraged by the turnout and that people are thinking about things that can be done to make it better.”