UND dean on quest for a cure 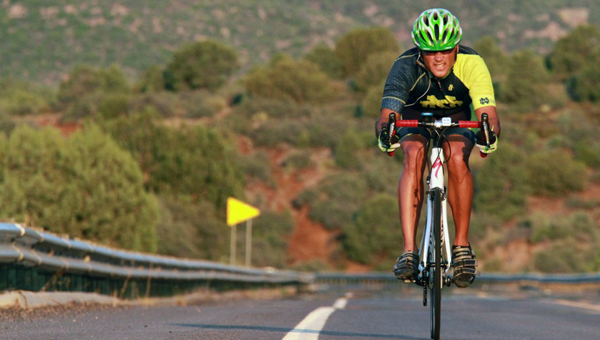 Greg Crawford, dean of Notre Dame’s College of Sciences, is on a nearly 3,5000-mile bike ride to raise money to help fund research aimed at curing Niemann-Pick Type C disease. On Sunday, Crawford rode from Atmore to Greenville. He will complete his ride Aug. 2 in Baltimore, Md. (Courtesy Photo)

As dean of Notre Dame’s College of Sciences, part of Greg Crawford’s job is to oversee research done by the college.

That includes a project that aims to find a cure for Niemann-Pick Type C disease, a rare and fatal disease that primarily strikes children.

But Crawford wanted to do more than simply oversee the research that was being done by others.

That desire led him to take on a nearly 3,500-mile bike ride across the United States, which included a stop in the Camellia City, in search of a cure.

“I wanted to do something since I didn’t have any biology or chemistry skills, so this was great way for me to raise money for those who can do research on the cause,” Crawford said. “I’m a physicist by trade. I oversee all the sciences at Notre Dame, but I have no skills in biochemistry. I don’t do that type of research, but I wanted to contribute in some way and I thought the bike rides would be a way for me in a leadership role to actually create some money. It’s my contribution.”

This summer’s ride, which began on June 27 in Long Beach, Calif., and will end Aug. 2 in Baltimore, Md., is the fourth such ride Crawford has made to raise funds for Niemann-Pick research.

“Because it is a rare disease, we have to do fundraising in sort of unusual, nontraditional ways, such as runs or bike rides. Whatever it takes to find dollars to fund the research.”

According to Crawford, approximately 300 children in the U.S. have Niemann-Pick Type C disease, which is a genetic, cholesterol storage disorder. Its rarity makes it difficult for scientists to receive funding to search for a cure.

Notre Dame became an active supporter in the search for a cure in large part because of legendary Fighting Irish coach Ara Parseghian. The rare and fatal disease claimed the lives of three of Parseghian’s grandchildren.

The Parseghian family raises money for a cure through the Ara Parseghian Medical Research Foundation, and in 2010, the foundation partnered with Notre Dame to co-manage a fund to find a cure.

Since 2010, Crawford has helped raise nearly $300,000 for Niemann-Pick research through  “Road to Discovery” — his cross-country bike rides.

The money raised from this year’s ride will help fund clinical trials, which according to Crawford cost approximately $50,000 per patient.

“One of our professors, Paul Helquist, is a medicinal chemist,” Crawford said. “He’s actually discovered a drug in the lab that works on the Niemann-Pick cell line and the fundraising this year is going to be all put forth toward clinical trials for this new drug. So we’re very excited about what’s possible in the future of this disease.”

Crawford says he plans to continue his rides until a cure for the disease is found.

“I’m so inspired by the Parseghian family, and their commitment to finding a cure,” Crawford said. “I just want to do whatever I can to help find a cure.”

Those interested in making a donation can visit roadtodiscovery.nd.edu for details.