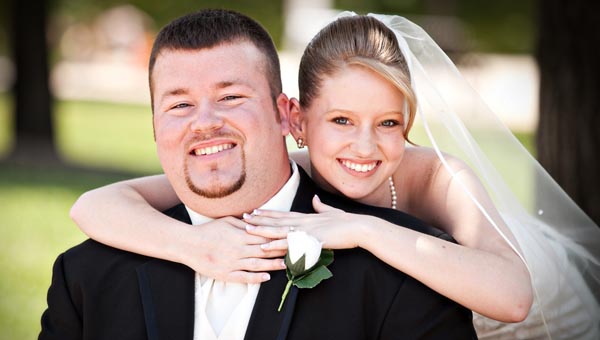 Brady Gray and his wife Ashley moved to Greenville in February. Gray serves as the youth pastor at Southside Baptist Church. (Courtesy Photo)

It wasn’t until his college years that new Southside Baptist Church youth pastor Brady Gray realized that the importance of life is having an impact in someone else’s.

This is largely because, for a time, most of Gray’s biggest role models wore jerseys instead of robes.

“I grew up in sports, and I played sports year-round,” Gray said. “One of the main influences in my life came through coaches and through adults when I was a teenager.”

While at Auburn University pursuing a master’s degree, Gray worked as an intern with a ministry focused on youth.

It was then that God’s plans for his future become easily apparent.

“It was during that time that I realized that you really don’t understand the impact that you make on students’ lives,” Gray added. “The need was there and I knew that I had a passion for that age group, and God just sort of took care of the rest.”

The time spent in Auburn also inevitably led Gray to Greenville, after a fellow youth pastor at the school put in a good word for him for the youth pastor position at Southside.

Though Gray hails from Ohio and his wife, Ashley, from Louisville, Ky., he answered the call immediately.

Both being from decidedly different climates, adjusting to the humidity and heat was the first immediate challenges. But the larger challenge would lie in learning the area, Southern culture and, most importantly, the people.

Fortunately, Southern hospitality is something of a commodity in the Camellia City.

“The people of Greenville have been very supportive of my wife and myself, and they were there waiting for us when we pulled in with the moving truck,” Gray said. “There’s been very few weeks that go by when we don’t have some type of dessert at our house that someone has given us. It’s been a wonderful reception.”

Getting to know the supportive community of Southside Baptist Church and elsewhere has been one of the primary challenges, and delights, for Gray since moving into Greenville this past February.

And the importance of the task set before him is something that is not easily forgotten.

“It’s not like a coach where you get a child for three or four years and then they graduate on,” Gray said. “I have them for six years or longer, and it’s way more important than sports — it’s forever.”

Fortunately for Gray, the world outside the walls of Southside Baptist Church are just as integral to his ministry as the church itself, and several summer youth trips have afforded him the opportunity to get to know both the youth and adult members of his congregation well.

The recent M-Fuge camp is one such example.

Those opportunities to fellowship outside the church, according to Gray, are invaluable.