Campers get a taste of Wild West 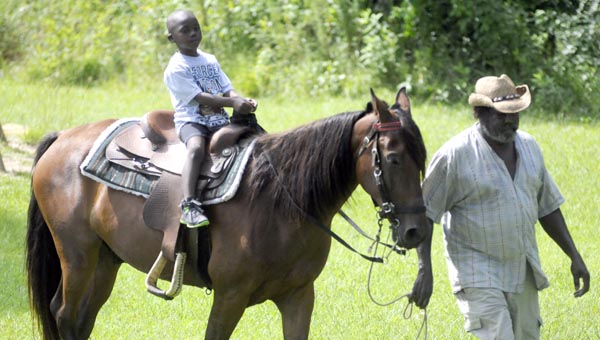 Butler County youth recently received a taste of the Wild West, courtesy of the Greenville Parks and Recreation Department.

As a part of the Dunbar Summer Day Camp’s Wild, Wild West Week, children got to channel their inner cowboy as they rode horses and enjoyed slices of watermelon under the shade on a sweltering summer morning Thursday at Dunbar Park.

Afterward, the children participated in an old-fashioned watermelon seed-spitting contest, in which the winner received snacks as a reward.

The horses were donated to the cause by local farmer Terry Williams.

The Dunbar Summer Day Camp is chiefly tasked with providing the county’s youth with an opportunity to venture beyond their comfort zones, and to have a bit of fun while they’re at it.

But learning remains an essential part of the process.

“It’s a nine-week program this year, and we just try to enrich the lives of kids with as many activities as we possibly can,” said Summer Day Camp director Deirdre Womack.

“This year our theme is Red, White and Blue, so we’re featuring things about the United States, and they will also be featured in our culminating activity on August 1.”

And the 2013 session has already been an enriching experience, with activities including karate lessons, trips to the library and the zoo, skating, bowling, and more.

Eric Wilson visited the Dunbar Community Center to teach the children martial arts, while musician Anthony Womack played a few songs for the campers and conducted a sing-along with them.

Demetrius Scott of the Butler County Extension Office delivered a lecture on technology with the children using the ever-popular iPad, and Lakeshia Womack spoke to the group in a series called “Money Matters.”

The curriculum for the Dunbar campers is ultimately the result of a group effort from many members of the community — members who donated their time and skills to make sure that the boundaries of the city’s youth were pushed beyond the living room sofa.

“I think it is very important, because some of the children here probably don’t have many experiences outside of what they see at home and at school,” Womack said.

“And when we have various individuals from the community to come in and show what their talents are, and to explain that they went off to college and came back home to be whatever it is that they are, it gives the kids a little more insight and something else to dream about.”