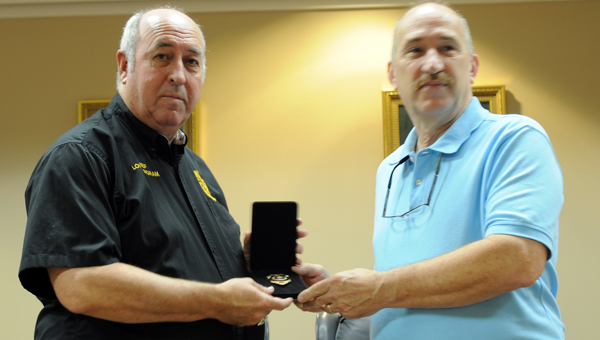 For more than a decade, E.B. Stafford led the Greenville Police Department.

On Wednesday, current Chief Lonzo Ingram honored his service by presenting his family with a Greenville Police Department badge.

“We felt like this was a good way to honor the memory and service of one of our longtime chiefs,” Ingram said. “He served our community for a number of years and we wanted to recognize him.”

Paul Stafford, the youngest of E.B. Stafford’s 10 children, accepted the badge on behalf of the family.

“It’s a great feeling,” Paul Stafford said of his father being honored. “My dad was a great guy. He was a great father, and he was a great police chief. It’s just a real honor for my family for him to be remembered like this.”

Ingram said a pictured of E.B. Stafford will be framed and placed at the Greenville Police Department.

“He was a good chief and a good man, and he deserves to be honored and remembered by our department,” Ingram said.