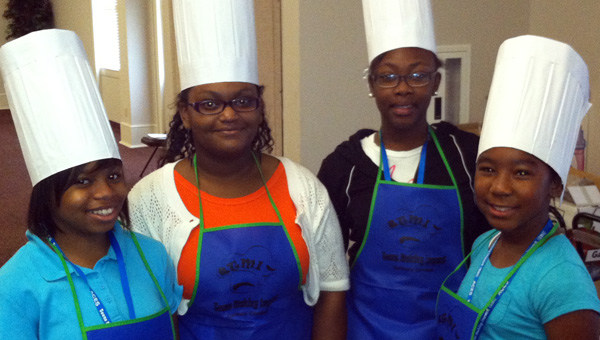 One group of Butler County students learned that there really is no such thing as too much information as participants of Alabama A&M University’s Teens Making Impact (TMI) Conference late last month.

The TMI program, sponsored by the Alabama Cooperative Extension System, aims to educate young people about the importance of developing skills crucial to success in the working world, especially those skills that often go overlooked.

Students who participated in the TMI program throughout the previous school year met twice a week for lessons, and the leadership conference serves as a culminating event of sorts for those students that made it to the end of the program.

Butler County Extension Coordinator Anthony Pinkston said that the program stemmed from a desire to teach young people skills that may not necessarily be a focus of school curriculum these days.

“Especially with things like etiquette, that’s just not taught in schools any more,” Pinkston said. “It’s just a skill that our young people are lacking. So the cooperative extension just felt that that’s a valuable skill for them to be able to navigate through everyday life.”

Things like learning the difference between using shorthand text-speak and writing a formal business letter are some of the critical skills that might seem small upon first glance, but could be the deciding factor between success and failure on a job application.

These skills are taught via hands-on and minds-on applications through role-playing and other similar activities, and then reinforced with pre-tests and post-tests to check whether the information has been retained.

There was also a culinary arts contest consisting of teams from several counties that put skills learned during the program to the test, like following directions and communication and presentation skills.

But equally important as the information imparted during the conference was the experience of being on a college campus.

The students took tours of the different colleges at the Alabama A&M campus, learning more about the different fields of study offered and the career possibilities they presented.

During the three-day, two-night stay, the conference participants were college students for all intents and purposes, staying in dorm rooms and eating at the student cafeteria on campus.

And according to Pinkston, breaking out of one’s own comfort zone and experiencing new things is just as vital to success.

“We don’t have nearly enough programs for young people today, and any time that you can broaden a child’s horizons and let them see that there is more to the world than just their neighborhood, or even their city, for that matter, helps to inspire them to do well in school and go further,” Pinkston said.

“And not go further as in leaving from home if they choose to go to college, but to go out and experience new things. Those things are really important, and they have a big place in how far you can go in life.”