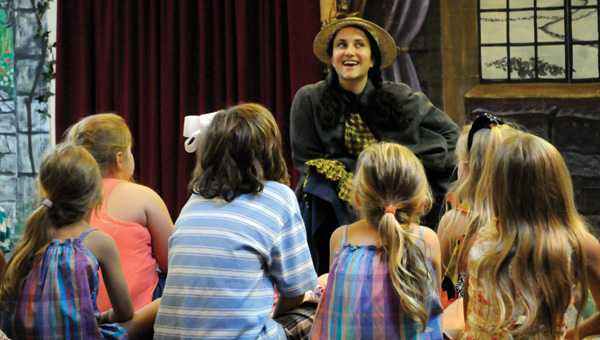 For a select few visitors at the Greenville-Butler County Public Library, imagination leapt from the pages of one classic novel in English literature to the stage.

The prestigious Hampstead Stage Company performed an adaptation of “The Secret Garden” as this year’s summer reading program drew to a close.

The summer reading program is a month-long spotlight on reading where children can come and interact with others, take on a craft and read a story.

The sessions were held each Tuesday and Thursday, and the program aimed to help children maintain their focus on reading and avoiding the “summer slump,” a deterioration of their reading skills prior to moving to the next grade level.

The New Hampshire-based Hampstead Stage Company is a nonprofit organization that is well known for brining quality professional theater acts to schools, libraries and communities across all 48 continental United States.

The organization’s goal is to educate young audiences and to spread an appreciation of classic literature through theater.

Kevin Pearcey, director of the Greenville-Butler County Public Library, said that the GBCPL landing the well-known stage company was a direct consequence of pursuing similar goals.

“They actually called me about performing here, and we were able to coordinate it with their tour schedule,” Pearcey said.

“We were happy to have them because I think it’s great to expose children to theater, especially theater based on classic literature.”

With only two actors, Amanda Martin as Mary Lennox and Devin Holloway portraying a number of roles (both male and female), the duo managed to charm the audience composed of children and adults alike.

The pair used imagination with a minimalist set to maximum effect, with elaborate hand gestures and a variety of physical comedy to capture and hold the viewers’ attention.

Aiding these practices were a series of distinct voices — complete with British accents of various dialects — from Holloway, who assumed characters including an elderly lady, a grumpy old groundskeeper and a youthful and energetic boy.

Audience participation also factored in heavily to the show, as children were asked to come onstage and take on the roles of various forest animals to surprise the main character.

Coupled with some quick costume changing behind the scenes, the performance was a seamless transition of nonstop delight.

Pearcey was just as impressed as the audience, and added that this performance will hopefully be the first of many to come.

“They did an outstanding job, and Devin and Amanda were true professionals,” Pearcey said.

“Devin was just amazing in that he played five total characters. The children who stayed after the performance and took part in the acting workshop also enjoyed what Devin and Amanda taught them. We’ll have them back in the fall.”