Rivers offers smile, kindness to those he meets 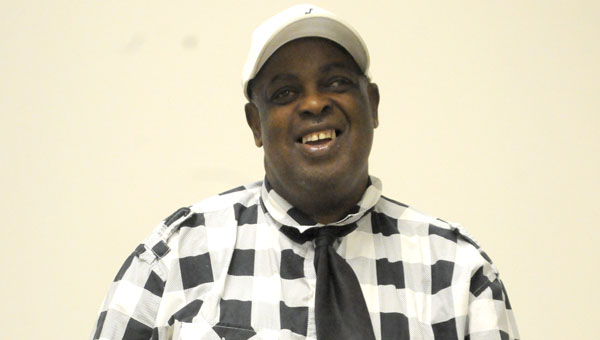 Tommy Rivers learned long ago the value of a smile. Rivers often gives a smile with customers at CVS or Super Foods while serving as a greeter for the stores. (Advocate Staff/Jonathan Bryant)

It is impossible to tell how much a simple smile can brighten one’s day, and that’s a lesson that one Greenville resident has learned all too well.

For years, Tommy Rivers has walked the streets of the Camellia City, more often than not with a newspaper in tow, greeting each new face he meets in the same pleasant manner.

After a lifetime of greeting Greenville residents with the same warm smile, Rivers, now 60, is hardly a stranger to anyone.

But no matter whether Rivers is someone’s senior or junior, showing people respect is of the utmost importance.

“A lot of the people in Greenville know me, and I always like to call them ma’am and sir,” Rivers said. “I love Greenville, and I love the people of Greenville. I go around and see them and speak to them.”

Despite the fact that nearly the entirety of Greenville has become Rivers’ extended family, his own family remains an important facet of his life.

“I’ve got a good family, and my sister, Sadie, takes good care of me,” Rivers added.

“I’m her baby brother, and she’s always taken care of me ever since I was little. The family that sticks together and prays together stays together.”

Prayer isn’t a foreign concept to Rivers, as he a member of Rocky Mount Missionary Baptist Church, where Rev. Randy Tolliver serves as pastor.

Prayer and donation collecting are among his top responsibilities.

“I’m not a deacon yet, but I’m a junior deacon, and that’s almost just like a deacon,” Rivers joked. “I go (to church) every Sunday, and I don’t miss one. And when we don’t have anything at ours, I just go around to different churches.”

And although church occupies a great deal of his time, Rivers can most often be found at CVS and Super Foods, either inside welcoming the shoppers or outside cleaning the parking lots.

It’s during these moments that Rivers is treated to kindness in turn from those within the community.

“I go and greet people with a big smile on my face, and people on the streets tell me, ‘Tommy, you’re a good fellow,’” Rivers said. “And every time I’m out there cleaning the CVS parking lot, someone offers to get me a drink.”

But random acts of kindness are the rule, and not the exception, according to Rivers.

As someone who has spent his entire life in Greenville, it’s become increasingly apparent to him that the more things change, the more they stay the same.

“I’ve seen a lot of buildings go up and come down, but the people are the same,” Rivers said. “Greenville has always been a nice place, filled with good people.”