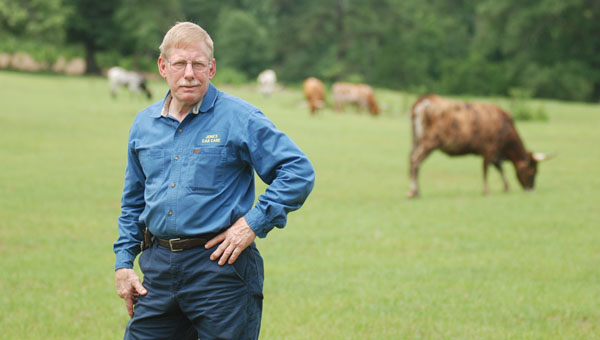 Greenville native Jimmy Jones has been breeding longhorns since 1986. The second largest agricultural commodity in Butler County is cattle. It accounted for $5.3 million of the county’s economy in 2010. (File Photo)

Although the economic downturn of 2008 made it seem as though the agriculture and forestry industries had bought the farm, recent studies show that not only is business better than ever, but it’s steadily improving.

The Alabama Cooperative Extension System, in conjunction with Alabama A&M University and Auburn University, issued a report last week that detailed the noticeable impact of agriculture, forestry and related industries in Butler County in 2010.

Agriculture, forestry and related industries contributed $70.4 billion to Alabama’s economy in 2010, accounting for almost 40 percent of its Gross Domestic Product (GDP) and employing 580,295 people, 22 percent of the state’s workforce.

These industries accounted for $261 million of the $1.1 billion economy in Butler County in 2010 alone — the most recent numbers available.

Agriculture and forestry provided 2,934 jobs (or 29.8 percent of the entire county’s workforce) in the same period of time.

This information indicates that agriculture, forestry and related industries are second only to the manufacturing industry in terms of the number of people employed within the county.

Butler County Extension Coordinator Anthony Pinkston said that although these statistics are from three years ago, the economic upswing is indicative of a trend that is still continuing today.

“In 2010, we were just bouncing back from that big recession that we had in 2008 and 2009, so yes, things have steadily been progressing,” Pinkston said.

“Prices for cows and hay and all of those different things have been increasing year by year, so the economic impact would be even higher than (the report indicates) because it’s been increasing.”

“And there are different programs for folks that want to go into poultry producing to be able to have those poultry houses built, and there’s training readily available. That has been growing over the years not just in Butler County, but in the surrounding counties, also.”

The second largest and third largest were cattle and greenhouse, nursery and floriculture production, representing 4.8 percent and 2.3 percent respectively.

Among the many obvious benefits that these industries provide to Butler County residents, there are a few that may not be readily apparent.

“For one, when you have these economies that have a large agricultural production, those producers buy a lot of their goods and services right here in Butler County,” Pinkston said.

“But they put a lot of their income and capital within the county that they live. These farmers are local, and a lot of that money stays right here in Butler County, so that’s a good thing.”

Pinkston also mentioned that the diverse array of producers that manage everything from cattle, poultry, timber and even the increasingly popular goat farms all serve to make the industry within Butler County look particularly healthy.

But ultimately, Butler County’s good fortune in agriculture, forestry and related industries might derive from its most unique features.

“Because the interstate is right here, and you have Highway 31 South and Highway 55, it makes it a desirable place because you don’t have to travel so far to get to your four main highways to move products or to have products brought in,” Pinkston said.

“But you still have your small-town feel — it’s a good place to raise kids, the crime rate is really low, and it’s friendly.”