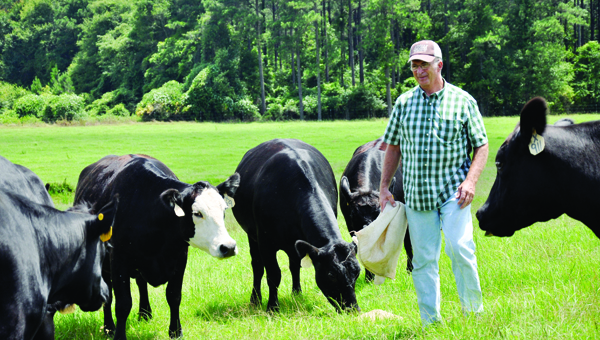 Poultry and egg production leads the way in agriculture in Crenshaw County, according to a new impact report released by Auburn University and the Alabama Cooperative Extension System.

Poultry and egg contribute millions to the local economy and some 490 jobs. It contributes 70.2 percent of the county’s total agricultural and forestry production.

Ray Hilburn of the Alabama Poultry and Egg Association said there are roughly 80 to 85 producers in Crenshaw County.

“We have no table egg producers in Crenshaw County,” he said.

“They own and feeed the bird,” he said. “The farmers are the grower. Farmer own the land, chicken houses and furnish labor and utilities.”

Hilburn said he’s been in the poultry business his entire life.

“My father built a hatchery when I was 4 years old,” he said.

The second largest ag industry is cattle, which contributed 7.2 percent of the county’s total agricultural and forestry production.

Cattle is something Mike and Lora Gail Bagents known a lot about.

The couple, who owns a farm near Moody’s Crossroads, have been in the beef cattle business all their lives.

“Mike and I grew up on farms,” Lora Gail said. “I grew up in Montgomery County in Pintlala. We’ve been married for 29 years. When we got married, my cows came with me and my bull.”

A few years, later they added poultry farming to their list.

“We got chicken house for income to pay bills,” Lora Gail said. “Our broilers are small compared to most. Our capacity is about 92,000.”

The have different types of cattle.

The Bagents have around 130 registered cows and 230 commercial cows.

Come August, there will be plenty of calves on their farm.

The Bagents artificially inseminate registered cows and then they use what’s called a “cleanup bull” to make sure that each cow conceives.

For their commercial cows, they simply use a bull.

Typical gestation period for a cow is more than nine months.

“Costs are skyrocketing,” Lora Gail said. “Fuel and feed have all gone up.”

Mike Bagents attributes the agricultural diversity their farm has to its success.

“We could not have made it just on cows or just on chickens,” he said.

The Bagents have four grown children.

“We gave them a cow when they were little, and they have their own herds, which has helped put them through Auburn,” she said. “Blake, our youngest, will use it to help pay for vet school.”

Even their grandson Noah has been given his own heifer.

“He’s in the cow business, too,” Lora Gail said.

The third largest was corn, which contributed 0.4 percent of the county’s total agricultural and forestry production.

The information about the impact of the state’s agriculture, forestry and related industries was made available as a result of a collaborative effort of the Alabama Agribusiness Council, the Alabama Cooperative Extension System, Auburn University and others, and information was based on studies conducted in 2010.