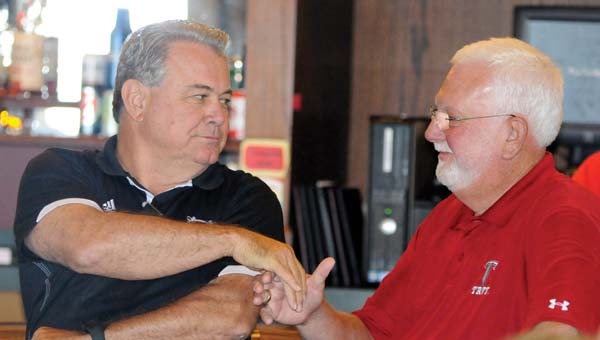 More than 100 Troy fans came out to Cambrian Ridge to make the Trojan Tour ’13 stop in the Camellia City one of the most lively ones, despite being the smallest.

But one theme was common among them all — there is a bright future ahead of Troy athletics.

“There’s no reason why Troy can’t be the next Boise (State) in football, the next Gonzaga in basketball or the next Rice in baseball,” Hartwell said. “You can draw a 200-mile radius around the City of Troy and you look at the talent of student athletes you can draw from in that area — you look at the talent pool and what we can provide from Troy, and we’re very, very excited about the future of Troy athletics.”

Hartwell also spoke about the genuine pride and love from Troy fans that empower athletes, and the importance of harnessing that power.

According to head baseball coach Bobby Pierce, It’s that same fan presence that propelled Troy to victory against Alabama in the 2013 NCAA Baseball Tournament earlier this month.

“We doubled them in number, and quadrupled them in presence,” Pierce said. “Trojan Nation was loud and proud.”

Head football coach Larry Blakeney, who said that Butler County was “like home,” illustrated clearly the challenges ahead of his team this fall.

Some difficult changes to the coaching staff and only three scheduled Saturday home games are alleviated by a strong recruiting class and a renewed focus on team chemistry.

According to Blakeney, new defensive coordinator Wayne Bolt has already built a rapport with his players.

“Everybody knows how loud he is, and I call him ‘Suggestion Box’ because he worries me to death with suggesting what we need to do, but I know he means well,” Blakeney joked.

“But he is hard on them, and he will not accept anything but their best.”

There are also some changes coming to the facilities at Troy University, as Hartwell stated that he “wants the competition in his rearview mirror” both on and off the field.

These additions include a $2.3 million enhancement to the softball complex that addresses sightline issues, new dugouts, locker rooms and a turf conversion.

But the biggest undertaking of all is the north end zone project that aims to do more than add seating capacity to Troy’s Veterans Memorial Stadium.

With the inclusion of a weight room, additional training facilities, a central meeting space for families and an academic center, the new facility looks to benefit a much wider audience than football players and the coaching staff.

The continual upgrade of facilities, in conjunction with becoming a dominant force in the Sun Belt across all sports and continuing to graduate student athletes, is the key to becoming a more attractive school to students and athletes alike.

And drawing those students in from areas like Butler County is key in that endeavor.

Hartwell added that the concentration of Troy folks in the hub of Greenville made the city such an integral stop on the tour, and establishing a personal relationship with those fans will be key in the coming years.

And, judging by the fan response received in Greenville thus far, a return trip to the Camellia City next year is a no-brainer.

“You look at this turnout here today, and absolutely,” Hartwell said. “Go ahead and sign us up.”