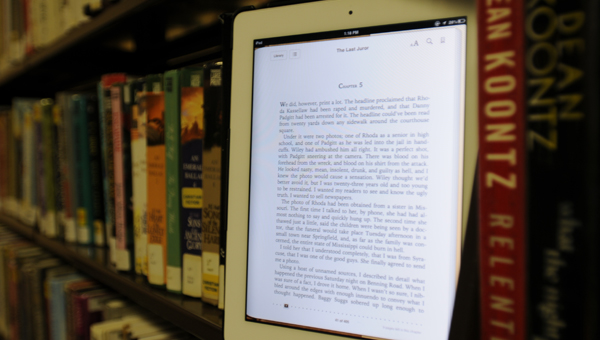 Due to the widespread increase in popularity of digital tablets and similar devices the Greenville-Butler County Public Library will begin to offer E-books on July 1. (Advocate Staff/Andy Brown)

While Kindles, iPads and various other devices are as commonplace as cell phones, it’s no small wonder that traditional books may seem like relics of a bygone era.

Appropriately, the Greenville-Butler County Public Library will join the ranks of several other facilities that have begun to accommodate readers by offering e-books in addition to the more conventional fare, beginning on July 1.

According to GBCPL Director Kevin Pearcey, the decision to offer e-books was the result of various stars gathering in alignment and was, ultimately, inevitable.

“We already offer books in a variety of different formats — large print, paperback, audio tapes and CDs — so having digital books available for the public was something the Board of Trustees and myself thought was the next logical step in offering a new service to our patrons,” Pearcey said. “Additionally, this year we applied for and was fortunate to be awarded a Library Services and Technology (LSTA) Grant through the state that helps offset the costs of software and adding e-books to our collection. We also had a large amount of interest from the public, so we anticipate this being a new format for reading that lots of people take advantage of.”

The widespread increase in popularity of digital tablets and similar devices has driven e-books to new heights, according to a study conducted by the Pew Internet and American Life Project late last year.

The study concludes that between December 2011 and November 2012, e-book readers grew from 16 percent to 23 percent while the number of adults who read primarily printed books fell from 72 percent to 67 percent.

While the shift might seem slight to some, the numbers are indicative of a trend that has not shown any signs of slowing since 2008.

Even Pearcey, who once considered himself a staunch advocate of printed books, has had a change of heart in recent years.

“I still love books in print, and the weight of a good book and holding one in my hand,” Pearcey said. “I was actually one of the persons who said, ‘I would never read a book on a computer!’ However, having read some books on a Kindle, it’s actually quite convenient and very easy on the eyes. An e-reader device is also versatile in that you can increase the typical type size and store thousands of books on something that weighs little more than a paperback novel.”

The Greenville Public Library has joined a consortium of other libraries around the state in a network called Camellia Net, which patrons can gain access to via a link on the library website, www.greenville-bcpl.org.

Once there, users can enter their library card number and PIN (the user’s last name, all lowercase) to gain access to the e-book collection.

From that point on, members will be able to download books to their Kindle, Nook, iPad or other mobile device.

The library will be offering training every Thursday in July for anyone wishing to bring his or her mobile device to learn how the process works.