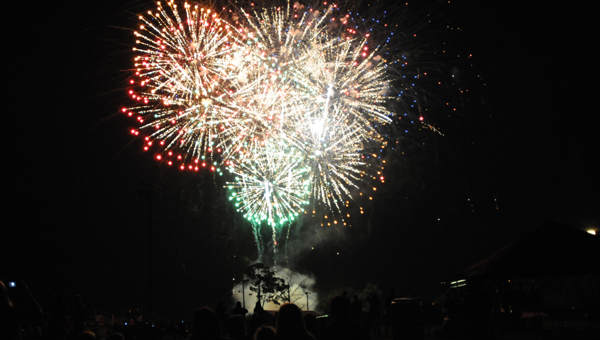 Pyrotecnico, a New Castle, Penn., based company, will create the fireworks display for Greenville’s “Celebrate America,” which is set for July 4 at Greenville High School’s Tiger Stadium. (File Photo)

Fireworks will light up the sky above Tiger Stadium July 4 as Greenville celebrates America.

Celebrate America, which is hosted by the Greenville Area Chamber of Commerce, will feature games, food, music, and of course, fireworks.

“We’re so excited to be having the event again this year,” Francine Wasden, executive director of the Greenville Area Chamber of Commerce, said. “The City and the Chamber both felt like this is an event that everyone really looks forward to, and is really a great time for the community to get together and have a good time. It’s going to be a really great event.”

Pyrotecnico, a New Castle, Penn., based company, will be responsible for creating the fireworks show, which will begin at 9 p.m.

Wasden encourages those who plan to attend to bring lawn chairs and blankets, and sit on the field to take in the show.

“It’s going to be a great show, and we’d love for everyone to come down on the field and watch it,” she said. “We just think it’s going to be so much fun.”

“We’re going to do things a little bit different this year,” she said. “We’re going to have a DJ. We’ve never done that before. We’re hoping it will be real interactive and keep the crowd involved.”

Along with the DJ, children from the Dunbar Community Center day camp will be performing.

There will also be Air Jumpz for the children.

“This year one of the Air Jumpz will have a water feature,” Wasden said.

Wasden said there would also be plenty of food available at the concessions stands, which will be run by area churches and the Greenville Parks and Recreation Department.

“We’re going to have hotdogs, nachos, boiled peanuts, popcorn, shaved ice and drinks,” Wasden said. “The different organizations that run the concession stands will get the money for that, so having a meal out there is a great way to support these groups.”

The Chamber will also be giving away free slices of watermelon.

“This is an event that we feel like brings our community together, so we hope everyone will come out and celebrate with us,” Wasden said.